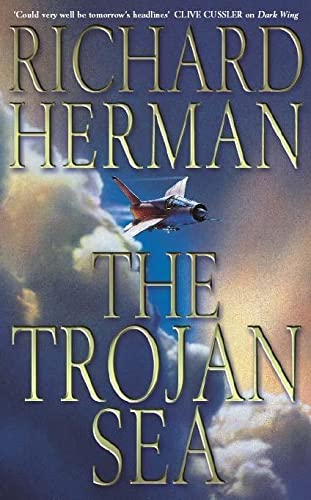 Out of Stock
$15.99
inc. GST
From the Squadron Leader of technothrillers, comes an explosive novel of oil, money, nail-biting action and power.
Very Good
Only 0 left

Lieutenant Colonel Mike Stuart, a paper pushing Air Force plans officer in the Pentagon, is sailing the Caribbean when a monster hurricane drives his sailboat into safe harbour in Cuba. A harmless incident but when he returns to work, his life takes an exciting turn. In Dallas, Texas, LJ Ellis, the beautiful, charismatic president of a small oil company, discovers what may be the world's last large oil reserve and determines to possess it. And Stuart would seem to be a faceless obstacle in her way, barely worthy of her attention as she twists the world of international oil and politics in pursuit of her goal, reaching into the White House and the highest levels of government.

Richly rounded characters on a ride as swift and surely aimed as a guided missile * Kirkus on THE TROJAN SEA *
"Thinking man's" thrillers that out-Clancy Clancy...Herman has a distinctive beat to his wickedly adroit military thrillers * Kirkus on AGAINST ALL ENEMIES *
Could very well be tomorrow's headlines * Clive Cussler on DARK WING *
A credible and exciting plot with attractive characters and breakneck action, Herman's latest is a sure winner * Publishers Weekly on AGAINST ALL ENEMIES *
Truly edge of the seat exciting * Dale Brown on FORCE OF EAGLES *
This is the sharp end with vivid descriptions of air combat, the smell of hot oil and fear * The Times on THE WARBIRDS *
Solid entertainment with nary a hitch * Publishers Weekly on EDGE OF HONOUR *

Richard Herman retired from the US Air Force in 1983 with the rank of Major after serving for 21 years. The author of ten technothrillers, he now lives in Gold River, California..

GOR001730329
The Trojan Sea by Richard H. Herman
Richard H. Herman
Used - Very Good
Paperback
Hodder & Stoughton General Division
2001-07-05
448
0340738286
9780340738283
N/A
Book picture is for illustrative purposes only, actual binding, cover or edition may vary.
This is a used book - there is no escaping the fact it has been read by someone else and it will show signs of wear and previous use. Overall we expect it to be in very good condition, but if you are not entirely satisfied please get in touch with us.