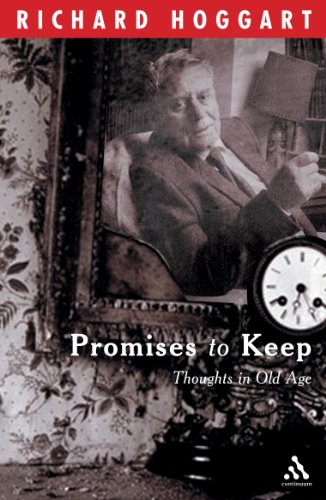 Promises to Keep
by Richard Hoggart

Promises to Keep by Richard Hoggart

The outstanding quality of Richard Hoggart's new book is its charm. In the style of Montalgne, Hoggart looks back over his years and pinpoints those human qualities which have come to mean most to him and which he has appreciated in others. Part of this man's charm derives from the fact that like most truly great men he is also extremely self-effacing. Literacy and the use of language remain an abiding concern of Professor Hoggart but he also analyses in these pages the nature of human courage, the uses of memory, the true purposes of education, love and charity, and the approach of the Grim Reaper. Throughout, Hoggart considers the public ideas and events which have interested him, and their intertwinings with his personal life. Examples would be- the family, politics, the intellectual life, beliefs and morals, words and writing. All of these are looked at through what the author describes as his 'time telescope'. Thus this book is not a theoretical or abstract record. Its argument is illustrated from life. We live in the age of the cult of youth and personality. Our lives are increasingly driven and influenced by The Media. But in these pages is contained the wisdom of one of the most astute and perceptive of our contemporary critics - a literary, social and cultural judge who is also very greatly loved by his admirers.

'...modest and engaging.'--Blake Morrison "The Guardian "
'Part of the book's charm is its unpredictability. You can never be sure what is waiting for you as you turn the page... a beguiling melange of anecdote and consideration... we can be grateful for Richard Hoggart's unemphatic words.' Times Literary Supplement
extract printed in The Guardian, 8 October 2005
'...modest and engaging.'--, "The Guardian "
'...modest and engaging.'--Sanford Lakoff "The Guardian "
"Hoggart's accounts are rich in detail and in personal leaps of imagination, doubts and tremors." "a reflective book, with a conversational style, which made me think about the 'discourse of empathy' and the potential contribution of cultural studies to enlarge gerontology's disciplinary foundations." Ageing and Society Vol.27-2007, Cambridge University Press--Sanford Lakoff

Richard Hoggart now lives in retirement. His book The Uses of Literacy was and remains a seminal text. He is the father of the influential journalist Simon Hoggart. Last year Continuum published his Mass Media in a Mass Society.

1. Realising that Old Age Approaches; 2. Great and Terrible Happenings; 3. Family Matters; 4. Uncertainties and After; 5. Introduction to Intellectual Life; 6. Self Love, Belief, Morals; 7. Words and Writing; 8. Memory; 9. Among Thoughts of Death

GOR002753430
Promises to Keep by Richard Hoggart
Richard Hoggart
Used - Very Good
Hardback
Bloomsbury Publishing PLC
2005-09-10
192
0826487149
9780826487148
N/A
Book picture is for illustrative purposes only, actual binding, cover or edition may vary.
This is a used book - there is no escaping the fact it has been read by someone else and it will show signs of wear and previous use. Overall we expect it to be in very good condition, but if you are not entirely satisfied please get in touch with us.