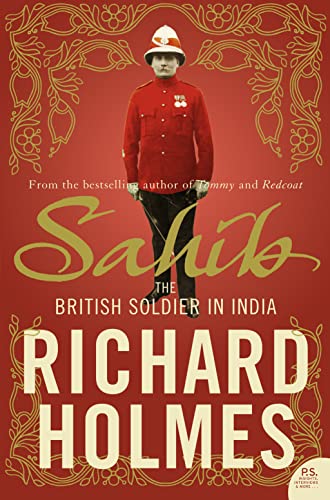 From bestselling author of `Tommy' and `Redcoat', the rich history of the British soldier in India from Clive to the end of empire considered to be the jewel in Britain's imperial crown.

From bestselling author of `Tommy' and `Redcoat', the rich history of the British soldier in India from Clive to the end of empire considered to be the jewel in Britain's imperial crown.

`Sahib' is a broad and sweeping military history of the British soldier in India, but its focus, like that of Tommy and Redcoat before it, will be on the men who served in India and the women who followed them across that vast and dusty continent, bore their children, and, all too often, mopped their brows as they died.

The book begins with the remarkable story of India's rise from commercial enclave to great Empire, from Clive's victory of Plassey, through the imperial wars of the 18th-century and the Afghan and Sikh Wars of the 1840s, through the bloody turmoil of the Mutiny, and the frontier campaigns at the century's end. With its focus on the experience of ordinary soldiers, `Sahib' explains to us why soldiers of the Raj had joined the army, how they got to India and what they made of it when they arrived. The book examines Indian soldiering in peace and war, from Kipling's `snoring barrack room' to storming parties assaulting mighty fortresses, cavalry swirling across open plains, and khaki columns inching their way between louring hills. Making full use of extensive and often neglected archive material in the India Office Library and National Army Museum, `Sahib' will do for the British soldier in India - whether serving a local ruler, forming part of the Indian army, or soldiering with a British regiment - what `Tommy' has done for the ordinary soldier in World War I.

`For anyone interested in the Raj this book is a must.' Observer

`Richard Holmes's mastery of the British Army is unequalled...A worthy memorial of one of the extraordinary experiences in British history.' Max Hastings, Sunday Telegraph

`Holmes is a passionate and richly entertaining champion of the rank and file.' Daily Telegraph

`It would be hard to exaggerate the excellence of this book. vivid, comprehensive, well writtten, pacy, colourful.' Simon Heffer

Celebrated military historian and television presenter Richard Holmes is famous for his BBC series `Rebels and Redcoats: The American Revolutionary War'; `Wellington: The Iron Duke'; `Battlefields'; `War Walks' and `The Western Front'. He is the author of many bestselling and widely acclaimed books including `Firing Line', `The Western Front', `Redcoat', `Tommy' and `Dusty Warriors'. He is general editor of the definitive `Oxford Companion to Military History'. He taught military history at Sandhurst for many years and is now Professor of Military and Security Studies at Cranfield University and the Royal Military College of Science. His biography of the Duke of Marlborough is published by HarperCollins in 2008. He lives near Winchester in Hampshire.

GOR001407829
Sahib: The British Soldier in India 1750-1914 by Richard Holmes
Richard Holmes
Used - Very Good
Paperback
HarperCollins Publishers
2006-04-03
416
0007137540
9780007137541
N/A
Book picture is for illustrative purposes only, actual binding, cover or edition may vary.
This is a used book - there is no escaping the fact it has been read by someone else and it will show signs of wear and previous use. Overall we expect it to be in very good condition, but if you are not entirely satisfied please get in touch with us.