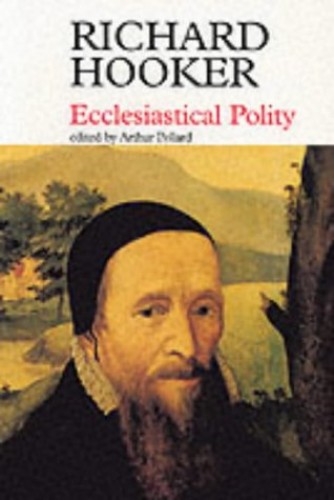 Richard Hooker (1553/4-1600) was one of the great theologians of the Church of England. He wrote his major work Ecclesiastical Polity, at the height of the controversy between Puritan and Catholic interests. It is a book which, with masterly elegance and restraint, defines the middle way of Anglicanism and has remained at the heart of the Anglican Communion. Hooker was sane, noble, sincere and supremely civilizedoriginalwith a. A classic of English prose, Ecclesiastical Polity establishes an Anglican perspective, suspended, as it were by Grace, between Geneva and Rome. One critic describes Hooker as an 'English Aristotle set to music'.

This selection puts the massive work into manageable form. It follows the order of the orginal and links together the several books witha head-note to each. It reminds us not only of the immense, historical importance of Hooker's writings but also of its continuing relevance in embodying the principal ethos and practice of the Church of England at a time when its values are being called into question, at least within the church itself.

GOR001814623
9780856358609
0856358606
Ecclesiastical Polity by Richard Hooker
Richard Hooker
Used - Very Good
Paperback
Carcanet Press Ltd
1990-11-01
128
N/A
Book picture is for illustrative purposes only, actual binding, cover or edition may vary.
This is a used book - there is no escaping the fact it has been read by someone else and it will show signs of wear and previous use. Overall we expect it to be in very good condition, but if you are not entirely satisfied please get in touch with us
Trustpilot