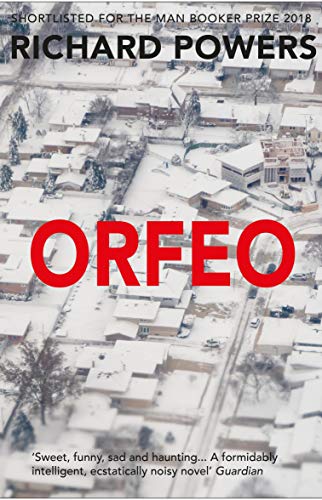 A major and thrilling new novel that explores private fears, public hysteria and the art of music, by one of America's most important living writers

Composer Peter Els opens the door one evening to find the police on his doorstep. His amateur science lab - the latest experiment in his lifelong attempt to find music in the most surprising places - has aroused the suspicions of Homeland Security. Panicked by the raid, Els turns fugitive. As an internet-fuelled hysteria erupts, Els - the 'Bioterrorist Bach' - pays a final visit to the people he loves, those who shaped his musical journey. Together, they hatch a plan to turn this disastrous collision with state security into a work that will reawaken a nationwide audience to the glorious sounds and symphonies that lie hidden all around them.

Powers is prodigiously talented. Besides being fearfully erudite, he writes lyrical prose, has a seductive sense of wonder and is an acute observer of social life... I [picked] it up eagerly each day and [found] myself moist-eyed when I came to its last pages * New York Times *
A virtuoso performance * Sunday Times *
Extraordinary and confounding, mind-spinning and wonderful * Independent on Sunday *
Sweet, funny, sad and haunting... A formidably intelligent, ecstatically noisy novel * Guardian *
A magnificent and moving novel * Los Angeles Times *
This is the best novel about classical music that I have read since Thomas Mann's Doctor Faustus... There are passages that make you want to run to your stereo * Independent *
Powers proves, once again, that he's a master of the novel with Orfeo, an engrossing and expansive read that is just as much a profile of a creative, obsessive man as it is an escape narrative * Esquire *
Extraordinary... His evocations of music, let alone lost love, simply soar off the page... Once again, Richard Powers proves himself to be one of our finest novelists * Newsday *
A first-class American road novel... Orfeo is about one about a man on the lam remembering where he's come from and how, incredibly, he's arrived - and us with him - at today's here and now * Slate *

Richard Powers is the author of twelve novels, including Orfeo (which was longlisted for the Man Booker Prize) and The Overstory (which was shortlisted for the 2018 Man Booker Prize and won the 2019 Pulitzer Prize). He is the recipient of a MacArthur grant and the National Book Award, and has been a four-time NBCC finalist. He lives in the foothills of the Great Smoky Mountains.

GOR006133677
Orfeo by Richard Powers
Richard Powers
Used - Very Good
Paperback
Atlantic Books
2014-07-31
384
1782391649
9781782391647
Long-listed for The Man Booker Prize 2014 (UK) Long-listed for FOLIO PRIZE 2014 (UK) Long-listed for IMPAC DUBLIN LITERARY AWARD 2015 (UK)
Book picture is for illustrative purposes only, actual binding, cover or edition may vary.
This is a used book - there is no escaping the fact it has been read by someone else and it will show signs of wear and previous use. Overall we expect it to be in very good condition, but if you are not entirely satisfied please get in touch with us.