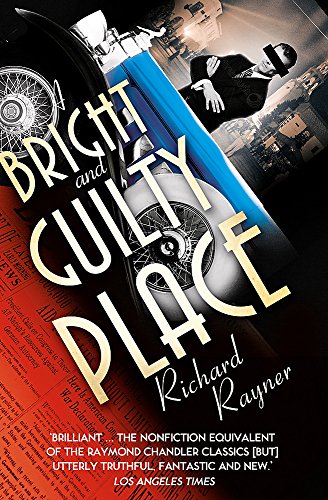 A Bright and Guilty Place by Richard Rayner

A Bright and Guilty Place: Murder in L.A. by Richard Rayner

In the roaring twenties Los Angeles was the fastest growing city in the world, mad with oil fever, get-rich-quick schemes, celebrity scandals, and religious fervor. It was also rife with organized crime, with a mayor in the pocket of the syndicates and a DA taking bribes to throw trials. In A Bright and Guilty Place, Richard Rayner narrates the entwined lives of two men, Dave Clark and Leslie White, who were caught up in the crimes, murders, and swindles of the day.

Over a few transformative years, as the boom times shaded into the Depression, the adventures of Clark and White would inspire pulp fiction and replace L.A.'s reckless optimism with a new cynicism. Together, theirs is the tale of how the city of sunshine got noir.

When A Bright and Guilty Place begins, Leslie White is a naive young photographer who lands a job as a crime-scene investigator in the L.A. district attorney's office. There he meets Dave Clark, a young, movie-star handsome lawyer and a rising star prosecutor with big ambitions. The cases they tried were some of the first "trials of the century," starring dark-hearted oil barons, sexually perverse starlets, and hookers with hearts of gold. Los Angeles was in the grip of organized crime, and White was dismayed to see that only the innocent paid while the powerful walked free. But Clark was entranced by L.A.'s dangerous lures and lived the high life, marrying a beautiful woman, wearing custom-made suits, yachting with the rich and powerful, and jaunting off to Mexico for gambling and girls. In a shocking twist, when Charlie Crawford, the Al Capone of L.A., was found dead, the chief suspect was none other than golden boy Dave Clark.

A Bright and Guilty Place is narrative non-fiction at its most gripping. Richard Rayner portrays an L.A. controlled by organized crime, where brutal murders, spectacular trials, political misdeeds, and the sexual perversities of Hollywood starlets are chronicled in graphic detail in the tabloids; where writers like Raymond Chandler and Dashiell Hammett transformed a dark reality into gripping fiction; and whose events would inspire the shadowy L.A. of film noir.

Brilliant... the nonfiction equivalent of the Raymond Chandler classics [but] utterly truthful, fantastic and new. * Los Angeles Times *
A brilliant retelling of Los Angeles history and noir ... * The New York Times editors' choice *
An engrossing account, which features more villainy and skulduggery than can be easily summarised ... * Associated Press *
You'll really love A Bright and Guilty Place. * The Washington Post *
It's rich, dense, mesmerising, encyclopaedic ... * Paul Greengrass, director *
Richard Rayner makes masterful use of his material-sex, murder, corruption, greed, and the invention of noir-to concoct a seething, sinful tale worthy of Raymond Chandler himself. This is narrative nonfiction at its best: meticulously researched, deftly drawn, and more compelling than anything the imagination might dare to conjure. * Karen Abbott, author of Sin in the Second City *
A Bright and Guilty Place is a seductively readable knot of intersecting stories about pre-noir Los Angeles. It has an intriguing shape, a spectrum of emotions, beckoning suspense, satisfying inevitability, and a flavour all its own, at once familiar and strange. * Luc Sante, author of Low Life *
Thanks to this detailed and cinematic narrative of desperate people in a desperate city, LA the place, LA the novel, and LA the film are fused into a tour de force of LA noir. * Kevin Starr, University of Southern California *
Richard Rayner is the author of The Cloud Sketcher, Drake's Fortune, The Associates, and several other books. His writing appears in The New Yorker, the Los Angeles Times, and elsewhere. He is an Englishman living in Los Angeles.
GOR003002255
9781849012058
1849012059
A Bright and Guilty Place: Murder in L.A. by Richard Rayner
Richard Rayner
Used - Very Good
Paperback
Little, Brown Book Group
2010-01-07
336
N/A
Book picture is for illustrative purposes only, actual binding, cover or edition may vary.
This is a used book - there is no escaping the fact it has been read by someone else and it will show signs of wear and previous use. Overall we expect it to be in very good condition, but if you are not entirely satisfied please get in touch with us
Trustpilot