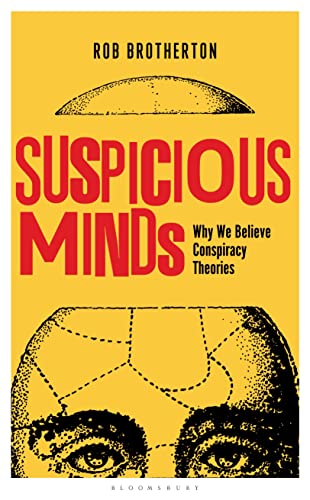 Used Price
$28.99
inc. GST
Free Shipping in Australia
Suspicious Minds decodes the psychology of why we all believe in conspiracy theories--some of us just hide it better than others
Like New Very Good

Suspicious Minds: Why We Believe Conspiracy Theories by Rob Brotherton

'A first class book' Sunday Times We're all conspiracy theorists. Some of us just hide it better than others. Conspiracy theorists do not wear tin-foil hats (for the most part). They are not just a few kooks lurking on the paranoid fringes of society with bizarre ideas about shape-shifting reptilian aliens running society in secret. They walk among us. They are us. Everyone loves a good conspiracy. Yet conspiracy theories are not a recent invention. And they are not always a harmless curiosity. In Suspicious Minds, Rob Brotherton explores the history and consequences of conspiracism, and delves into the research that offers insights into why so many of us are drawn to implausible, unproven and unproveable conspiracy theories. They resonate with some of our brain's built-in quirks and foibles, and tap into some of our deepest desires, fears, and assumptions about the world. The fascinating and often surprising psychology of conspiracy theories tells us a lot - not just why we are drawn to theories about sinister schemes, but about how our minds are wired and, indeed, why we believe anything at all. Conspiracy theories are not some psychological aberration - they're a predictable product of how brains work. This book will tell you why, and what it means. Of course, just because your brain's biased doesn't always mean you're wrong. Sometimes conspiracies are real. Sometimes, paranoia is prudent.

Sophisticated and absorbing...This is a first-class book. It melds science, history and popular culture cleverly and with purpose. * Sunday Times *
A thought-provoking analysis and an appealing guide to thinking about conspiracies, real and imagined. * Wall Street Journal *
...presents a textured and often surprising look into the fascinating world of conspiracy theories. A world so often described as dark and shady is shown to be much closer to home than we could have first imagined. * The Psychologist *
Suspicious Minds details the various psychological 'quirks and shortcuts' that make us susceptible to conspiracy theories [...] offering a convincing argument against the common practice of tarring political opponents as conspiracy theorists. -- Adrian Chen * New York Times Book Review *
Clearly written and with liberal use of humor and numerous examples from scholarly research, this title provides a valuable look at why conspiracy theories abound and why we should continually assess our thinking. -- Richard Maxwell * 9/1 *
An enlightening and educational read. * How It Works *
In this fascinating, and often startling book, Rob Brotherton reveals that the crazy people may well be completely wrong in their beliefs, but they are no more crazy than you and me. * Fortean Times *

Rob Brotherton is an academic psychologist and science writer who likes to walk on the weird side of psychology. Rob completed a doctoral degree on the psychology of conspiracy theories, and taught classes on why people believe weird stuff and science communication as a member of the Anomalistic Psychology Research Unit at Goldsmiths, University of London. He now lives in New York City. Rob writes about conspiracy theories on his website ConspiracyPsychology.com.

GOR009225473
Suspicious Minds: Why We Believe Conspiracy Theories by Rob Brotherton
Rob Brotherton
Used - Like New
Hardback
Bloomsbury Publishing PLC
2015-11-19
304
1472915615
9781472915610
N/A
Book picture is for illustrative purposes only, actual binding, cover or edition may vary.
The book has been read, but looks new. The book cover has no visible wear, and the dust jacket is included if applicable. No missing or damaged pages, no tears, possible very minimal creasing, no underlining or highlighting of text, and no writing in the margins.