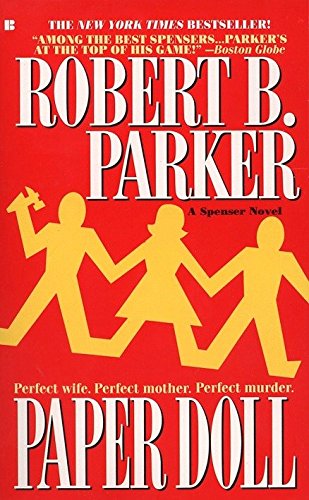 Paper Doll
by Robert B. Parker

In Stock
$14.49
+10% GST
Olivia Nelson appears to be the perfect wife and mother. So why was the socialite bludgeoned to death with a hammer? The police say it was random violence; Olivia's husband hires Spenser to prove otherwise. But the truth turns out to be as elusive as needles in a haystack. It's a case where nothing is what it seems--not even the victim.
Good
Only 2 left

Paper Doll by Robert B. Parker

Spenser tracks a mystery woman who refuses to rest in peace, in Robert B. Parker's most beguiling thriller yet. Sam Spade. Philip Marlowe. Lew Archer. Spenser. Like his legendary predecessors, the tough and classy Boston PI has become an American institution. With Paper Doll, Robert B. Parker takes Spenser down a sinister path, where every welcome masks a warning and identity is paper-thin. Hired by Loudon Tripp, an aggrieved Boston aristocrat who believes the brutal street slaying of his wife, Olivia, to be something other than random violence, Spenser immediately senses Tripp's picture-perfect version of his family's life is false. For starters, the victim's reputation is far too saintly, while her house is as lived-in as a stage set and her troubled children don't appear the product of a happy home. Spenser plunges into a world of grand illusion, peopled by cardboard cutouts, including: a distinguished public servant with plenty to hide; a wealthy executive whose checks bounce; a sleepy southern town seething with scandal; and the ambiguous Olivia herself. Consummately mysterious and smokily sensual, Paper Doll is Parker and Spenser at their compelling best.

"A new, very satisfying case...with the emphasis on sins of the soul...very well done."--Kirkus Reviews

About Robert B. Parker

Robert B. Parker was the author of seventy books, including the legendary Spenser detective series, the novels featuring Police Chief Jesse Stone, and the acclaimed Virgil Cole-Everett Hitch westerns, as well as the Sunny Randall novels. Winner of the Mystery Writers of America Grand Master Award and long considered the undisputed dean of American crime fiction, he died in January 2010.

GOR001987147
Paper Doll by Robert B. Parker
Robert B. Parker
Used - Good
Paperback
Penguin Putnam Inc
2000-10-14
279
0425141551
9780425141557
N/A
Book picture is for illustrative purposes only, actual binding, cover or edition may vary.
This is a used book - there is no escaping the fact it has been read by someone else and it will show signs of wear and previous use. Overall we expect it to be in very good condition, but if you are not entirely satisfied please get in touch with us.