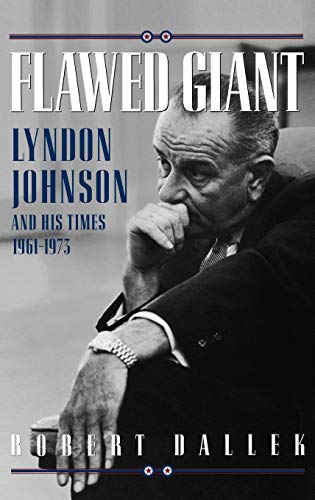 Used Price
$52.99
inc. GST
Free Shipping in Australia
In this final volume of his biography of Lyndon Johnson, Dallek takes us through Johnson's tumultuous years in the White House, his accomplishments there, and the tragic war that would be his downfall.
Very Good

Lone Star Rising, the first volume in Robert Dallek's biography of LBJ, was hailed as `a triumphant portrait of Lyndon Johnson as rich and oversized and complex as the nation that shaped him'. Now, in the final volume, Dallek takes us through Johnson's tumultuous years in the White House, his unprecedented accomplishments there, and the tragic war that would be his downfall. In these pages Johnson emerges as a character of almost Shakespearean dimensions, a man riddled with contradictions, a man of towering intensity and anguished insecurity, of grandiose ambition and grave self-doubt, a man who was brilliant, crude, intimidating, compassionate, overbearing, driven: `A tornado in pants.' Drawing on hundreds of newly released tapes and extensive interviews with those closest to LBJ - including fresh insights from Ladybird and his press secretary Bill Moyers - Dallek takes us behind the scenes to give us a portrait of Johnson that is at once even-handed and completely engrossing. We see Johnson as the visionary leader who worked his will on Congress like no president before or since, enacting a range of crucial legislation, from Medicare, environmental protection, and the establishment of the National Endowment of the Arts and Humanities to the most significant advances in civil rights for black Americans ever achieved. And we see for the first time the depth of Johnson's private anguish as he became increasingly ensnared in Vietnam, a war he did not want to expand and which destroyed his hopes for The Great Society and a second term. Exhaustively researched and gracefully written, Flawed Giant reveals both the greatness and the tangled complexities of one of the most extravagant characters ever to step on to the presidential stage.

"To read Robert Dallek's new book on LBJ is to be transported back to the era that he helped make so angry and turbulent...Flawed Giant captures in unforgiving detail a president whose flaws were tragically larger than life."--Chicago Tribune
"Dallek lets Johnson speak for himself, and no writer could create a more colorful, entertaining, inspiring, eccentric, or troubling character."--The Boston Sunday Globe
"Avoiding the demonology that has marred other accounts of this fascinating man, Dallek shows not only his failures and his excesses but also his gargantuan accomplishments and subtle mind. Here is a Johnson without tears or cheers but in a clear, steady light."--Washington Post Book World
"An historical biographical tour de force."--Richmond Times-Dispatch
"Poised, scholarly, and readable."--The New Yorker

Robert Dallek is Professor of History at Boston University. He is the author of several books, including Franklin D. Roosevelt and American Foreign Policy, for which he won a Bancroft Prize and was nominated for an American Book Award. He lives in Washington, D.C.