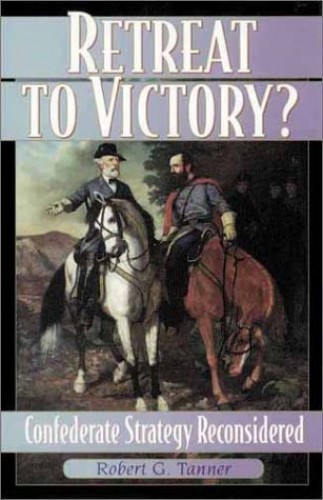 In Stock
$32.99
inc. GST
Did Confederate armies attack too often for their own good? Was the relentless, sometimes costly effort to preserve territory a blunder?
Very Good
Only 1 left

Did Confederate armies attack too often for their own good? Was the relentless, sometimes costly effort to preserve territory a blunder? Why great battles in Pennsylvania, Maryland, Virginia, and Tennessee rather than well-laid ambushes in Alabama's sandhills or the pine forests of the Carolinas? These questions about Confederate strategy have dogged historians since Appomattox. Many have come to believe that the South might have won the Civil War if it had only avoided head-on battles, conducted an aggressive guerrilla campaign, and maneuvered across wide swaths of territory to exhaust the Union's willingness to continue the war. Retreat to Victory? Confederate Strategy Reconsidered challenges this widely held theory. Robert G. Tanner argues that deep retreats and battle avoidance (the strategy of maneuver rather than combat) were not available to Southern leaders in planning their wartime strategy. The South fought as it did for valid reasons, according to Tanner, and this book examines these reasons in detail, including the South's need to protect its slave-based economy, to establish a state's rights-oriented government, and to win independence from the Union. Tanner uses Prussian military theorist Carl von Clausewitz's classic On War as a means for evaluating Confederate actions. On War provides a single measure for testing claims that the South could have prevailed by avoiding battles and forcing the Union to hold large tracts of land. Provocative and carefully researched, Retreat to Victory offers a fresh perspective on Confederate strategy and makes an important contribution to the field that no serious student of American history will want to miss.

Persuasive and compelling. A fascinating examination of Confederate strategy that makes an important contribution to an overall understanding of the Civil War. * The Philadelphia Inquirer *
Robert G. Tanner's latest foray into the often contentious arena of Civil War publishing will generate a firestorm of controversy. * North and South *
A fascinating insight and analysis of Confederate strategy. * Abilene Reporter-News (Texas) *
A short, readable, interesting book. * Civil War Times *
A number of historians have insisted the confederacy should have pursued a defensive strategy that would have avoided costly set-piece battles and conserved limited Southern manpower. In Retreat to Victory? Robert Tanner offers a compelling rejoinder to such arguments, assessing Confederate strategic options with an eye toward military, political, geographic, economic, and social factors. Anyone interested in how the Confederacy fought its war should consult this book. -- Gary W. Gallagher, author of The Confederate War and Lee and His Generals in War and Memory
Retreat to Victory is a must-read for anyone interested in investigating why the South lost the Civil War. * America's Civil War *
No one fascinated by the American Civil War or by military strategy in general should miss this persuasively and even elegantly argued book. -- Russell F. Weigley, Temple University
This concise book is impressive....For those interested in Civil War (especially southern) military strategy, this is a valuable book that students and teachers alike will find a nice addition to the classroom. * Military History Of The West *

Robert G. Tanner practices law in Atlanta, Georgia. He has studied and lectured on the Civil War for more than twenty-five years.

GOR009709208
Retreat to Victory?: Confederate Strategy Reconsidered by Robert G. Tanner
Robert G. Tanner
The American Crisis Series: Books on the Civil War Era
Used - Very Good
Paperback
Scholarly Resources Inc.,U.S.
2002-01-01
162
084202882X
9780842028820
N/A
Book picture is for illustrative purposes only, actual binding, cover or edition may vary.
This is a used book - there is no escaping the fact it has been read by someone else and it will show signs of wear and previous use. Overall we expect it to be in very good condition, but if you are not entirely satisfied please get in touch with us.