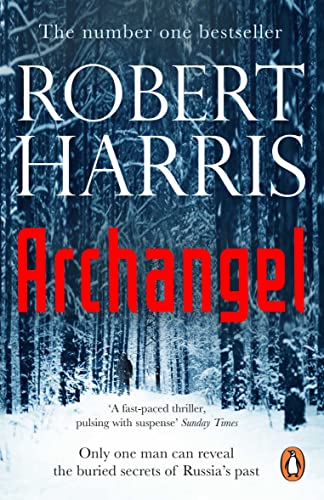 In Stock
$15.49
inc. GST
When historian Fluke Kelso learns of the existence of a secret notebook belonging to Josef Stalin he is determined to track it down, whatever the consequences.
Like New Very Good Good Well Read
Only 1 left

When historian Fluke Kelso learns of the existence of a secret notebook belonging to Josef Stalin he is determined to track it down, whatever the consequences. From the violent political intrigue and decadence of modern Moscow he heads north - to the vast forests surrounding the White Sea port of Archangel, and a terrifying encounter with Russia's unburied past.

"The best thriller for years" * Sunday Telegraph *
"His best yet: a fast paced thriller, pulsing with suspense, that surpasses even the expertly handled tensions and twists of Fatherland" * Sunday Times *
"Robert Harris confirms his position as Britain's pre-eminent literary thriller writer with Archangel" * The Times *
"A really gripping narrative, full of suspense and unexpected turns, which will keep you hooked until the climax on its final page... I have never read a thriller based in Russia which has such an authentic feel" * Evening Standard *
"Archangel is Harris's strongest book yet, confirming him as the leading current exponent of the intelligent literary thriller" * The Times *

GOR009312249
Archangel by Robert Harris
Robert Harris
Used - Like New
Paperback
Cornerstone
2009-10-01
432
0099527936
9780099527930
N/A
Book picture is for illustrative purposes only, actual binding, cover or edition may vary.
The book has been read, but looks new. The book cover has no visible wear, and the dust jacket is included if applicable. No missing or damaged pages, no tears, possible very minimal creasing, no underlining or highlighting of text, and no writing in the margins.