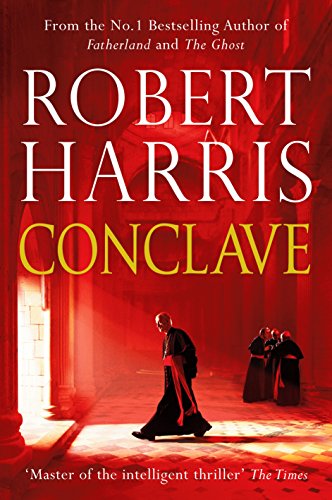 In Stock
$18.99
inc. GST
Behind the locked doors of the Sistine Chapel, one hundred and eighteen cardinals from all over the globe will cast their votes in the world's most secretive election.________________Munich, Robert Harris's new spy thriller set in the days leading up to World War II, is available now.________________`Unputdownable' Guardian `Gripping' Sunday Times
Like New Very Good
Only 3 left

THE POWER OF GOD. THE AMBITION OF MEN. ***SUNDAY TIMES BESTSELLER*** The Pope is dead. Behind the locked doors of the Sistine Chapel, one hundred and eighteen cardinals from all over the globe will cast their votes in the world's most secretive election. They are holy men. But they have ambition. And they have rivals. Over the next seventy-two hours one of them will become the most powerful spiritual figure on earth. ________________ Munich, Robert Harris's new spy thriller set in the days leading up to World War II, is available now. ________________ `Unputdownable' Guardian `Gripping' Sunday Times

"Harris' superlative skill at depicting power politics makes this an irresistibly gripping papal page-turner." * Sunday Times, BOOKS OF THE YEAR *
"Thriller of the year . . . with a plot so serpentine and sinuous that I could not bear to put it down." -- Geoffrey Wansell * Daily Mail BOOKS OF THE YEAR *
"`I have been waiting for most of my life for Robert Harris to write a novel that is not gripping, insightful and entertaining. I am waiting still. His latest, Conclave, is superb." -- Ben Macintyre * The Times BOOKS OF THE YEAR *
"A real page-turner, with a great twist in the final pages." -- Libby Purves * The Times BOOKS OF THE YEAR *
"Finishing this splendid and intelligent story, as with all great fiction, brings an acute sense of loss." -- Richard Susskind * The Times BOOKS OF THE YEAR *
"Robert Harris is incapable of writing a substandard novel." -- Alan Johnson * Observer, BOOKS OF THE YEAR *
"Each Robert Harris thriller is different but of exemplary consistency." -- Ian Rankin * Mirror BOOKS OF THE YEAR *
"Robert Harris is the master storyteller of our time . . . Beautifully constructed . . . it's dramatically compelling, politically intelligent, beautifully paced and with a lovely twist in the tail . . . narrative doesn't come better than this." * Scotsman BOOKS OF THE YEAR *
"I am about to use a word I have never knowingly used in any review of any book ever. During my 25-odd years of writing about books I have done my best to avoid cliches, slipshod summaries, oracular pronouncements and indeed anything else that might appear emblazoned on a book jacket. Nonetheless, there is only one possible word to describe Robert Harris's new novel, and it is this: unputdownable" -- Ian Sansom * Guardian *
"A master of producing thrillers of ever-tightening suspense, full of insider analysis of political power and the treatment of momentous events . . . gripping . . . more than a crime novel, it is also a psychological and political thriller . . . Conclave is a triumphant addition to Harris' acclaimed output" -- David Grylls * Sunday Times *

Robert Harris is the author of twelve bestselling novels: the Cicero Trilogy - Imperium, Lustrum and Dictator - Fatherland, Enigma, Archangel, Pompeii, The Ghost, The Fear Index, An Officer and a Spy, which won four prizes including the Walter Scott Prize for Historical Fiction, Conclave and most recently, Munich. Several of his books have been filmed, including The Ghost, which was directed by Roman Polanski. His work has been translated into thirty-seven languages and he is a Fellow of the Royal Society of Literature. He lives in West Berkshire with his wife, Gill Hornby.

GOR008033498
Conclave: The bestselling Richard and Judy Book Club thriller by Robert Harris
Robert Harris
Used - Like New
Hardback
Cornerstone
2016-09-22
304
0091959160
9780091959166
N/A
Book picture is for illustrative purposes only, actual binding, cover or edition may vary.
This is a used book - there is no escaping the fact it has been read by someone else and it will show signs of wear and previous use. Overall we expect it to be in very good condition, but if you are not entirely satisfied please get in touch with us.