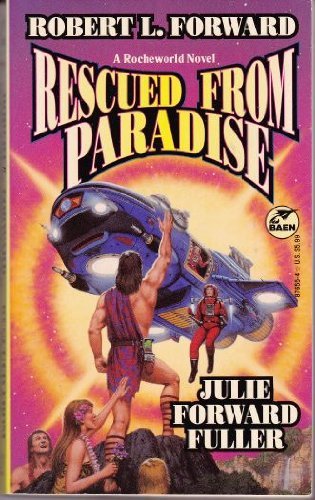 Rescued from Paradise
by Robert I. Forward

In Stock
$20.99
inc. GST
A new novel from the author of Rocheworld. The first interstellar expedition successfully reached Rocheworld, but when one of the shuttlecraft crashlands it will be decades before a rescue mission from Earth will arrive. The marooned explorers settle down to make a home, surviving disasters and raising families.
Good
Only 1 left

Rescued from Paradise: A Rocheworld Novel by Robert I. Forward

The first interstellar expedition successfully reached Barnard's Star and its amazing double-planet - Rocheworld - and made contact with the flouwen, intelligent aquatic beings with a talent for higher mathematics and a love of surfing. The flouwen joined with the humans to explore the rest of Barnard's planets and moons. When a landing craft carrying ten humans and three flouwen crashlanded on a habitable moon - Eden - the team was marooned on Eden with no hope of rescue until decades later when a second expedition was scheduled from Earth.

Not having another option, the marooned explorers settled down to make the moon their home, befriending the indigenous inhabitants, exploring, learning to live off the land, and, most important, raising families. They struggled to survive natural disasters and unexpected attacks from the sea. The years passed.

A new generation grows up hearing of Earth and its technology as a dim legen, and thinking of Eden as their natural home.

When the Second Expedition finally arrives, its leader announces that he has orders to rescue all the survivors. But twenty-five years have passed. Who of the original members of the expedition will survive to see Earth again, and what new sort of human now waits on Eden to be...Rescued From Paradise?