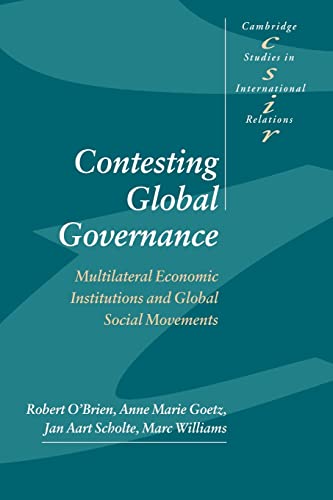 This book argues that increasing engagement between international institutions and sectors of civil society is producing a new form of global governance. The authors investigate 'complex multilateralism' by studying the relationship between three multilateral economic institutions (the IMF, World Bank, and World Trade Organization), and three global social movements (environmental, labour and women's movements). They provide a rich comparative analysis of the institutional response to social movement pressure, tracing institutional change, policy modification and social movement tactics as they struggle to influence the rules and practices governing trade, finance and development regimes. The contest to shape global governance is increasingly being conducted upon a number of levels and amongst a diverse set of actors. Analysing a unique breadth of institutions and movements, this book charts an important part of that contest.

GOR004323501
Contesting Global Governance: Multilateral Economic Institutions and Global Social Movements by Robert O'Brien (McMaster University, Ontario)
Robert O'Brien (McMaster University, Ontario)
Cambridge Studies in International Relations
Used - Very Good
Paperback
Cambridge University Press
2000-04-20
280
0521774403
9780521774406
N/A
Book picture is for illustrative purposes only, actual binding, cover or edition may vary.
This is a used book - there is no escaping the fact it has been read by someone else and it will show signs of wear and previous use. Overall we expect it to be in very good condition, but if you are not entirely satisfied please get in touch with us.