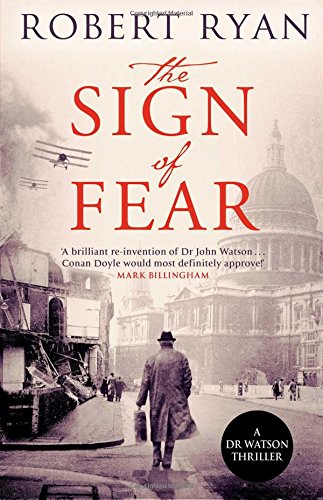 The skies above London hum with danger. And in the Channel enemies lie in wait...

Autumn, 1917. London is not the city that Dr John Watson and Sherlock Holmes once bestrode like giants. Terror has come from the sky and Londoners are scurrying underground in fear.

Then a twin tragedy strikes Watson. An old friend, Staff Nurse Jennings, is on a boat-ambulance torpedoed in the Channel with no survivors. And his concert-going companion, Sir Gilbert Hardy, is kidnapped.

Then comes the gruesome ransom demand, for Sir Gilbert and four others, which will involve terrible mutilation unless the demands are met.

Help comes from an unlikely source when Watson finds himself face-to-face with his old ruthless adversary, the "She Wolf" Miss Pillbody. She makes him a remarkable offer and so an unlikely partnership is formed - the enemy spy and Sherlock Holmes's faithful companion, a detective duo which will eventually uncover a shocking case of state-sponsored murder and find Watson on board a German bomber, with a crew intent on setting London ablaze.

ROBERT RYAN is an author, journalist and screenwriter. He was born in Liverpool and moved to London to study natural sciences at university. He began his writing career in the late 1980s for The Face, Arena and the US edition of GQ, before moving to a staff job in the Sunday Times. In 1999, after the publication of his first novel, Underdogs, he left to go freelance, although he is still a frequent contributor to the newspaper. He has published a total of twelve novels under his own name, the latest being Death on the Ice, and two (Steel Rain and Copper Kiss) as Tom Neale. The latter have been optioned by Fremantle TV with a view to creating a TV series. Ryan is currently working on his next novel and a variety of television projects. Find out more at www.robtryan.com

GOR007477720
The Sign of Fear by Robert Ryan
Robert Ryan
Used - Very Good
Hardback
Simon & Schuster Ltd
2016-01-14
448
1471135101
9781471135101
N/A
Book picture is for illustrative purposes only, actual binding, cover or edition may vary.
This is a used book - there is no escaping the fact it has been read by someone else and it will show signs of wear and previous use. Overall we expect it to be in very good condition, but if you are not entirely satisfied please get in touch with us.