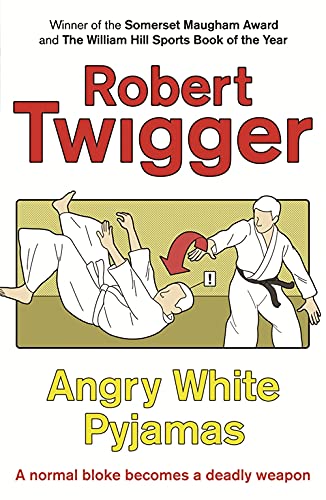 In Stock
$16.49
inc. GST
A brilliant and captivating insight into the bizarre nature of contemporary Japan.
Like New Very Good Good
Only 1 left

A brilliant and captivating insight into the bizarre nature of contemporary Japan.

Adrift in Tokyo, teaching giggling Japanese highschool girls how to pronounce Tennyson correctly, Robert Twigger came to a revelation about himself: he'd never been fit. In a bid to escape the cockroach infestation and sweaty squalor of a cramped apartment in Fuji Heights, Twigger sets out to cleanse his body and his mind. Not knowing his fist from his elbow the author is sucked into the world of Japanese martial arts, and the brutally demanding course of budo training taken by the Tokyo Riot Police, where any ascetic motivation soon comes up against blood-stained dogis and fractured collarbones.

In Angry White Pyjamas Robert Twigger skilfully blends the ancient with the modern - the ultra-traditionalism, ritual and violence of the dojo (training academy) with the shopping malls, nightclubs and scenes of everyday Tokyo life in the twenty-first century - to provide an entertaining and captivating glimpse of contemporary Japan.

A frantic, very funny, urban quest. -- Simon Garfield * Mail on Sunday *
A book of unexpected brilliance. It is subtle, funny, stimulating and original - a rites-of-passage story, an explanation of an alien culture, and an inspiring work of philosophy -- Patrick French
His fine eye for eccentricities makes this an entertaining travelogue * The Observer *
A rattling good yarn and very funny into the bargain -- Tim Hulse * Independent on Sunday *
This is a splendidly written adventure, something sane at last on the craziness of martial arts * Independent on Sunday *
His explanation of how to come to terms with intense pain should be read to every footballer who has ever writhed about in agony after a kick on the shin... It is a clever, enthralling book -- Ian Wooldridge * Daily Mail *
Brilliant ... everyone should read it -- Tony Parsons * Late Review *
Wonderfully oddball ... Here is a cult book all right, which could do for Japan and the martial arts what Hornby did for Highbury and the football terraces -- Frank Keating * Guardian *
Poetry in motion -- Sue Townsend * Sunday Times *
Communicates the existential purity of his elective regime with irrepressible passion ... it also has the unmistakable stamp of authentic experience * Daily Telegraph *
Twigger vividly captures the wince-inducing physical and emotional trails endured by those who would wear the black belt. But he also offers a rare insight in aikido's peculiarly Darwinian group dynamic and how it fits into modern Japanese society. After this marvellously insightful account I will snigger no more at Steven Segal's po-faced chop-sockey -- Ben Farrington * Literary Review *
The most intriguing sports book ever to win the William Hill Sports Book of the Year award * Daily Mail *

Robert Twigger is a British author, poet and adventurer. After attending Oxford University he trained with the Tokyo Riot Police, which became the subject of his bestselling book Angry White Pyjamas. He has been awarded the Newdigate Prize for poetry, the Somerset Maugham Award for Literature and the William Hill Sports Book of the Year Award.

GOR010481212
Angry White Pyjamas by Robert Twigger
Robert Twigger
Used - Like New
Paperback
Orion Publishing Co
1999-10-23
320
0753808587
9780753808580
Winner of Somerset Maugham Award 1998 Winner of William Hill Sports Book of the Year 1998
Book picture is for illustrative purposes only, actual binding, cover or edition may vary.
This is a used book - there is no escaping the fact it has been read by someone else and it will show signs of wear and previous use. Overall we expect it to be in very good condition, but if you are not entirely satisfied please get in touch with us.