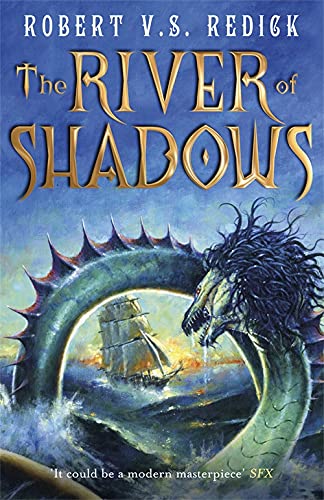 The River of Shadows
by Robert V. S. Redick

Out of Stock
$18.49
inc. GST
The continuing saga of the great ship Chathrand - not since Robin Hobb has fantasy taken to the waves in such high style.
Very Good
Only 0 left

The River of Shadows Summary

The River of Shadows by Robert V. S. Redick

The latest novel in Robert V.S. Redick's stunning and original fantasy epic is a taut race against time that takes the Chathrand across the seas in a desperate bid to stop the sorcerer Arunis unleashing the Swarm of Night.

From the mysterious River of Shadows to the Infernal Forest, to the Island Wilderness Pazel and his companions face a phantasmagoric journey through altered realities, a nightmare journey which offers glimpses of what might have been while taking them into the terror of what is to come.

Will Arunis use the cursed Nilstone to end the world?

This is a rich fantasy of nightmares and unexpected beauty and is proof that Redick is one of the most exciting new talents in fantasy.

The River of Shadows Reviews

PRAISE FOR ROBERT V. S. REDICK
"Robert Redick is an extraordinary talent.""--New York Times" bestselling author Karen Miller
The Red Wolf Conspiracy
"This is one terrific read. . . . I can't remember when I've been more enthralled."--Terry Brooks
"Masterful storytelling . . . a delight."--"Los Angeles Times"
"With comparisons to George R. R. Martin and Philip Pullman, this is highly recommended for all fantasy collections."--"Library Journal "(starred review)
The Ruling Sea
"Exciting . . . enough plot twists and double-crosses to satisfy the most demanding lovers of suspense . . . Redick's brilliant depiction of the microcosmic world aboard the "Chathrand" will captivate readers."--"Publishers Weekly"
"This high-seas adventure has all the ingredients for a good read: a large and diverse cast of characters, magic, deceit, betrayal and unexpected twists."--"RT Book Reviews"
"Easily one of the best fantasy nove

Robert V.S. Redick worked most recently for the anti-poverty organization Oxfam. His epic fantasy series, The Chathrand Voyage Quartet, begins with The Red Wolf Conspiracy and concludes with The Night of the Swarm (August 2012). Red Wolf was a finalist for the 2008 Locus Award for Best First Novel, and was one of the top ten science fiction and fantasy releases of the year in the SFX magazine poll. Book II, The Ruling Sea, was rated the #1 fantasy novel of 2009 by Fantasy Book Critic. Redick has also worked as an international development researcher in Argentina, baker, horse handler and drama critic. He lives in Florence, Massachusetts

GOR004251614
The River of Shadows by Robert V. S. Redick
Robert V. S. Redick
Used - Very Good
Paperback
Orion Publishing Co
2012-03-01
560
0575081856
9780575081857
N/A
Book picture is for illustrative purposes only, actual binding, cover or edition may vary.
This is a used book - there is no escaping the fact it has been read by someone else and it will show signs of wear and previous use. Overall we expect it to be in very good condition, but if you are not entirely satisfied please get in touch with us.