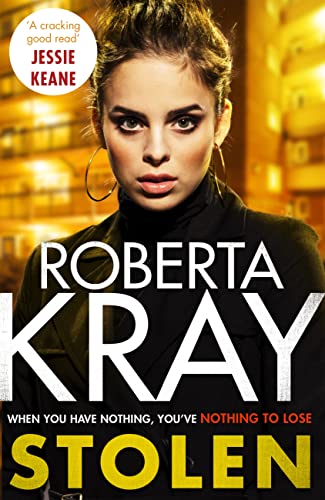 Stolen: When you have nothing, you've nothing to lose... by Roberta Kray

Lolly Bruce spent several years in the lap of luxury, but now she's back in a world she knows: London's East End. Her guardian Mal Fury is doing time, so Lolly is working on the wrong side of the law to get by. She'll need to use all her street smarts to keep her safe in Kellston.

Then one day the Old Bill turn up on her doorstep. Mal is on the run, but why when he has only months left to serve? Lolly is convinced the only thing Mal would escape for is news about the daughter he lost nineteen years ago. She's the only thing he has left to lose.

Private Investigator Nick Trent knows better than to get involved with the Furys, but his better judgement doesn't count for much when it comes to Lolly. Before he knows it he's agreed to help her track down Mal, and take on whatever the East End underworld throws at them...

STOLEN is the sequel to Roberta's thirteenth novel SURVIVOR, but can also be read as a standalone.

Through her marriage to Reggie Kray, Roberta Kray has a unique and authentic insight into London's East End. Roberta met Reggie in early 1996 and they married the following year; they were together until Reggie's death in 2000. Roberta is the author of many previous bestsellers including No Mercy, Dangerous Promises, Exposed and Survivor.

GOR010335717
Stolen: When you have nothing, you've nothing to lose... by Roberta Kray
Roberta Kray
Lolly Bruce
Used - Very Good
Hardback
Little, Brown Book Group
2019-11-07
416
075156964X
9780751569643
N/A
Book picture is for illustrative purposes only, actual binding, cover or edition may vary.
This is a used book - there is no escaping the fact it has been read by someone else and it will show signs of wear and previous use. Overall we expect it to be in very good condition, but if you are not entirely satisfied please get in touch with us.