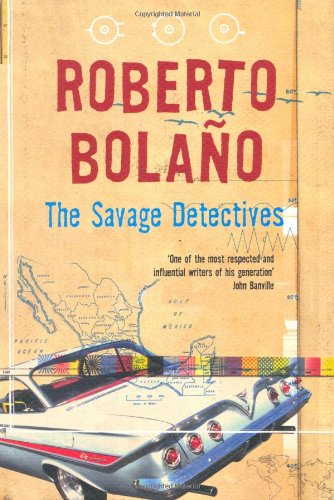 The Savage Detectives
by Roberto Bolano

In Stock
$12.99
+10% GST
An exhilarating, must-read novel from one of Latin America's pre-eminent writers, and author of the acclaimed masterpiece 2666.
Very Good Good
Only 4 left

The Savage Detectives by Roberto Bolano

With a new afterword by Natasha Wimmer

`Savagely comic yet equally tender . . . This novel is an elegy for a generation' Independent

Spanning two decades and crossing continents, theirs is a remarkable quest through a darkening universe - our own. It is a journey told and shared by a generation of lovers, rebels and readers, whose testimonies are woven together into one of the most dazzling Latin American novels of the twentieth century.

`The comic frenzy, the inventiveness of character and situation, and the mood-soaked depiction of 1970s Mexico is delightful' Times Literary Supplement

`A portrait of people for whom literature is bread and water, sex and death. The abiding message to be taken from Bolano's novel, and maybe from his fraught life, too: books matter' GQ

`It's no exaggeration to call Bolano a genius. The Savage Detectives alone should grant him immortality' Washington Post

`Bolano makes you feel changed for having read him; he adjusts your angle of view on the world' Guardian

"An utterly unique achievement--a modern epic rich in character and event. . . . [He is] the most important writer to emerge from Latin America since Garcia Marquez."--"San Francisco"" Chronicle""" "My favorite writer . . . "The Savage Detectives "is an ark bearing all the strange salvage of poetry and youth from catastrophes past and those yet to come."--Nicole Krauss, author of "The History ""of Love" ""The Savage Detectives" is deeply satisfying. . . . Bolano's book throws down a great, clunking, formal gauntlet to his readers' conventional expectations. . . . A very good novel."--Thomas McGonigle, "Los Angeles"" Times" "One of the most respected and influential writers of [his] generation . . . At once funny and vaguely, pervasively, frightening."--John Banville, "The Nation" "A bizarre and mesmerizing novel . . . It's a lustful story--lust for sex, lust for self, lust for the written word."--"Esquire" "Roberto Bolano's masterwork, at last translated into English, confirms this Chilean's status as Latin America's literary enfant terrible."--"Vogue" "Combustible . . . A glittering, tumbling diamond of a book . . . When you are done with this book, you will believe there is no engine more powerful than the human voice."--Emily Carter Roiphe, "Star Tribune "(Minneapolis)"" "An exuberantly sprawling, politically charged picaresque novel."--"Elle""" "Wildly enjoyable . . . Bolano beautifully manages to keep his comedy and his pathos in the same family.""--The New York Times Book Review"

Roberto Bolano was born in Santiago, Chile, in 1953. He grew up in Chile and Mexico City. His first full-length novel, The Savage Detectives, won the Herralde Prize and the Romulo Gallegos Prize, and Natasha Wimmer's translation of The Savage Detectives was chosen as one of the ten best books of 2007 by the Washington Post and the New York Times. Bolano died in Blanes, Spain, at the age of fifty. Described by the New York Times as "the most significant Latin American literary voice of his generation", in 2008 he was posthumously awarded the National Book Critics Circle Award for Fiction for his novel 2666. Natasha Wimmer is an American translator who is best known for her translations of Roberto Bolano's works from Spanish to English. She grew up in Iowa and also spent a few years as a child in Madrid. Wimmer attended Harvard University and studied Spanish literature. After college she began to work for Farrar, Straus, & Giroux, as an assistant and later as a managing editor, where she happened upon Bolano's Savage Detectives. Bolano's translator was too busy at the time to work on this project and Wimmer was thrilled to take it on herself. Her translation was incredibly well-received. She has since gone on to translate several of Bolano's works as well as the work of Nobel Prize-winner Mario Vargas Llosa. In 2007 she received an NEA Translation Grant, in 2009 she won the PEN Translation Prize, and she has also received an Award in Literature from the American Academy of Arts and Letters. Her translation of Bolano's 2666 also won the National Book Award's Best Novel of the Year. She is a Fellow of the National Endowment for the Arts and teaches translation seminars at Princeton University. She lives in New York City.

GOR001663712
The Savage Detectives by Roberto Bolano
Roberto Bolano
Used - Very Good
Hardback
Pan Macmillan
2007-07-20
608
0330445146
9780330445146
N/A
Book picture is for illustrative purposes only, actual binding, cover or edition may vary.
This is a used book - there is no escaping the fact it has been read by someone else and it will show signs of wear and previous use. Overall we expect it to be in very good condition, but if you are not entirely satisfied please get in touch with us.