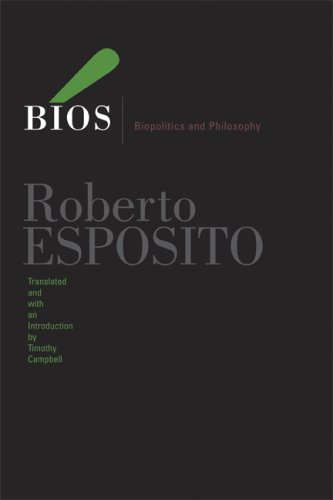 Roberto Esposito is one of the most prolific and important exponents of contemporary Italian political theory. Bios-his first book to be translated into English-builds on two decades of highly regarded thought, including his thesis that the modern individual-with all of its civil and political rights as well as its moral powers-is an attempt to attain immunity from the contagion of the extraindividual, namely, the community.

In Bios, Esposito applies such a paradigm of immunization to the analysis of the radical transformation of the political into biopolitics. Bios discusses the origins and meanings of biopolitical discourse, demonstrates why none of the categories of modern political thought is useful for completely grasping the essence of biopolitics, and reconstructs the negative biopolitical core of Nazism. Esposito suggests that the best contemporary response to the current deadly version of biopolitics is to understand what could make up the elements of a positive biopolitics-a politics of life rather than a politics of mastery and negation of life.

In his introduction, Timothy Campbell situates Esposito's arguments within American and European thinking on biopolitics. A comprehensive, illuminating, and highly original treatment of a critically important topic, Bios introduces an English-reading public to a philosophy that will critically impact such wide-ranging current debates as stem cell research, euthanasia, and the war on terrorism.

Timothy Campbell is associate professor of Italian studies in the Department of Romance Studies at Cornell University and the author of Wireless Writing in the Age of Marconi (Minnesota, 2006).

NGR9780816649907
9780816649907
0816649901
Bios: Biopolitics and Philosophy by Roberto Esposito
Roberto Esposito
Posthumanities
New
Paperback
University of Minnesota Press
2008-04-17
304
N/A
Book picture is for illustrative purposes only, actual binding, cover or edition may vary.
This is a new book - be the first to read this copy. With untouched pages and a perfect binding, your brand new copy is ready to be opened for the first time
Trustpilot