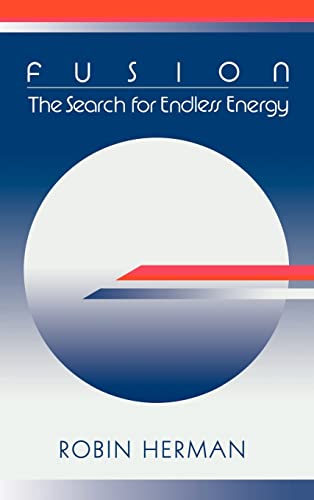 Used Price
$28.49
inc. GST
Free Shipping in Australia
Using the personal recollections of the scientists involved, this book traces the little-known international race to build the first atomic fusion reactor that began during the Cold War in secret laboratories in the USA, Britain and the Soviet Union, and evolved into an astonishing collaboration between East and West.
Reviews:
Trustpilot
Very Good

Fusion: The Search for Endless Energy by Robin Herman (Assistant Dean for Communications)

Fusion: The Search for Endless Energy is the story of the international race to build the first atomic fusion reactor. It is the story of a fraternity of scientists, whose members included such greats as Andrei Sakharov and Edward Teller. Transcending political boundaries, their utopian mission was to create a source of safe, clean, inexhaustible energy from the elements of seawater. The book abounds with fascinating anecdotes about fusion's rocky path. Aimed at a general audience, the book describes the scientific basis of controlled fusion - the fusing of atomic nuclei, under conditions hotter than the sun, to release energy. Using personal recollections of scientists involved, the book traces the history of this little-known international race that began during the Cold War in secret laboratories in the United States, Great Britain and the Soviet Union, and evolved into an astonishingly open collaboration between East and West.

'The fusion fraternity should read this book and take heart for the future.' Nature
'This book takes the reader beyond this trivial metaphor, explains why achievement has proved harder than anticipated, and shows what progress has been made.' The Times Higher Education Supplement
'This is a book that once started demands to be read in one sitting.' Physics World
"...an informative and lively account of the history and growth of a worldwide, surprisingly unpoliticized, research effort." Trenton Times
"Herman, a former New York Times reporter, has done an excellent job of explaining how politics has repeatedly shaped the nation's efforts to develop nuclear fusion. She is a good storyteller and has woven together many fascinating anecdotes about the bright and bizarre characters who have sought to tame the fury of the sun." The Philadelphia Inquirer
"...an intriguing contemporary history of science as an integrated field of endeavor..." San Francisco Chronicle
" ...a readable and at times exciting account of fusion research from the point of view of a nonspecialist and aimed at the general reader." Philip Davenport, Nature

GOR002061945
Fusion: The Search for Endless Energy by Robin Herman (Assistant Dean for Communications)
Robin Herman (Assistant Dean for Communications)
Used - Very Good
Hardback
Cambridge University Press
1990-10-26
280
0521383730
9780521383738
N/A
Book picture is for illustrative purposes only, actual binding, cover or edition may vary.
This is a used book - there is no escaping the fact it has been read by someone else and it will show signs of wear and previous use. Overall we expect it to be in very good condition, but if you are not entirely satisfied please get in touch with us.