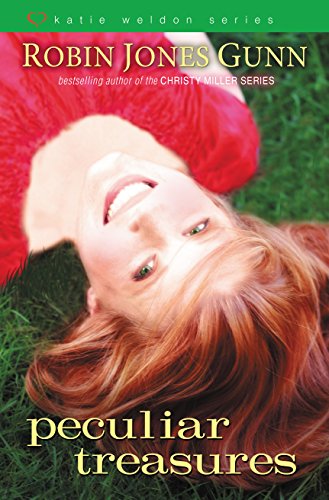 In Stock
$11.99
+10% GST
The first book in the Katie Weldon Series, Peculiar Treasures follows Katie as she struggles to believe that God can love her, faults and all. Katie turns to the women in her life as she tries to figure out her relationship with her boyfriend, but even their advice can't postpone the decision that will define the woman she's becoming.
Very Good
Only 3 left

Katie Weldon catches more than just the bouquet at the wedding of her best friend, Christy Miller. She also snags a job offer that launches her into an adventure she never imagined.

Katie eagerly accepts the job as resident assistant at Rancho Corona University, only to find herself in a community of conflict. She thought this was where God wanted her, but how can God use her-and love her-when everything is falling apart? Especially when it comes to her boyfriend, Rick.

Katie turns to the women in her life for solace, including Christy. In the safety of their love and encouragement she finally allows herself to spill her heart about her relationship with Rick. But even their advice can't postpone the decision Katie must face, a decision that will define who she is and the woman she's becoming.

Peculiar Treasures is the first book in the Katie Weldon Series.

'Katie Weldon is just finishing her junior year at Bible College. As she juggles finals, maid-of-honor duties at her best friend's wedding, work, and an almost-romance with her boss, she finds herself contemplating other big questions, such as whether to take a resident advisor position her senior year, and what to do about her undeclared major. Gunn has been writing about Katie and her friends for years, most notably in the popular Christy Miller series, and this is first in Gunn's Katie Weldon series. Katie's dilemmas may seem like the stuff of unabashedly light fiction, but they aren't without gravity and intrigue. Gunn is adept at denuding light fiction of its usual tics -- mediocre prose, cliched characters, and predictable plots -- and imbuing it with the hallmarks of literary fiction. The characters are multidimensional and ring true at nearly every turn. The dialogue that ensues is at once heartbreaking and utterly familiar to anyone who has ever been in Katie's shoes. Moreover, Katie's religious faith never feels sentimentalized or tacked on, but is integrated beautifully into the charming plot.' * Publishers Weekly *

Over the past 25 years Robin has written 82 books with almost 4.5 million copies sold worldwide. To her great delight, Robin's books are doing exactly what she always hoped to do - they are traveling around the world and telling people about God's love. She is doing the same. Over the past ten years Robin has been invited to speak at events around the US and Canada as well as in South America, Africa, Europe and Australia. Robin and her husband have two grown children and have been married for 35 years. They live in Hawaii where she continues to write and speak.

GOR001947849
Peculiar Treasures by Robin Jones Gunn
Robin Jones Gunn
Katie Weldon Series
Used - Very Good
Paperback
Zondervan
2008-03-07
304
031027656X
9780310276562
N/A
Book picture is for illustrative purposes only, actual binding, cover or edition may vary.
This is a used book - there is no escaping the fact it has been read by someone else and it will show signs of wear and previous use. Overall we expect it to be in very good condition, but if you are not entirely satisfied please get in touch with us.