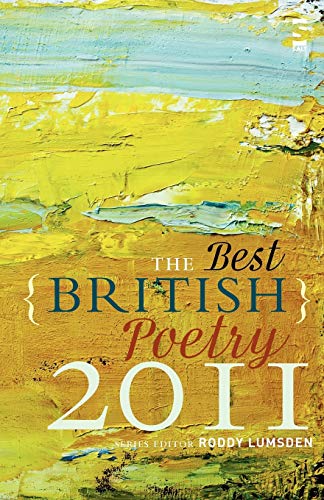 The Best British Poetry 2011 presents the finest and most engaging poems found in literary magazines and webzines over the past year. The material gathered represents the rich variety of current UK poetry. Each poem is accompanied by a note by the poet explaining the inspiration for the poem.

The Best British Poetry 2011 presents the finest and most engaging poems found in British-based literary magazines and webzines over the past year. The material gathered represents the rich variety of current UK poetry, including lyric, formal and experimental poetry. Each poem is accompanied by a note by the poet themselves, explaining the inspiration for the poem and why they decided to write the poem in that form. The format of the book will be familiar to those who have seen similar annual selections made in other countries such as Ireland, Australia and especially the US, where the equivalent annual book is a popular yet controversial landmark in each year's literary calendar. At a time when print journals still retain their significance and popularity and when new sites are flourishing on the web, this book offers a snapshot of current poetry practices in the country by offering a diverse selection of excellent poems.

Lumsden hosts a supremely eclectic party for 85 "new" British and Irish poets - more women than men, for once - whose newness turns on book-length debuts within the past 15 years rather than calendar age.

Identity Parade is an anthology which clearly achieves its objective of introducing its audience to a broad-church of today's talent.

I really enjoyed some poems in this anthology from writers I knew by name but had somehow bypassed. It's certainly a positive introduction to contemporary writing in Britain - a far wider range of styles and schools (and both the famous and lesser known, both the established magazines and the new) than is customary in British publications.

Salt Publishing and Roddy Lumsden have come up with a British parallel to the well established Best American Poetry Series overseen by David Lehman. The first editor is Lumsden himself, to be followed by Sasha Dugdale next year. While the initial volume is a largely mainstream selection (with, strangely, not a prose poem in sight), it possesses greater energy and range than the annual Forward Book of Poetry, as evidenced in poems by Gillian Allnutt, Amy De'Ath, and Chris McCabe, among others.

[A]n excellent collection, imaginatively and fairly edited, making it easily one of the books that every reader of poetry wanting to know about new British and Irish poetry should own. I already look forward to the 2012 edition.

The Best British Poetry 2011, edited by Roddy Lumsden, is an anthology of meticulous compilation: after a year spent foraging in the various British literary magazines, Lumsden has gathered 70 poems-representing 70 poets. In a format openly indebted to The Best American Poetry series, each poet has in turn commented on their poem's inception. Fundamental to the nature of this collection is the method of the editor; this is not an anthology of the most celebrated contemporary poets. Rather than being selected by virtue of reputation, each poet wins their place in this book by having a single good poem published in a magazine this year.

For poets, this is a useful anthology because Lumsden's choices are drawn from a wide range of UK poetry magazines and each poem is labelled with the source. In the back there is a handy alphabetical list of quality poetry magazines with their contact details. If you want to submit to these magazines you can read the type of poem the editors approve of. You can also find which magazines you'd like to subscribe to, and let's not forget how much these journals need our support!

... what would do we learn about contemporary poetry from this collection? Well, first, the standard is high. All of the poems are at least competent; clearly there are very many people who devote their lives to the art of poetry, and this is borne out by the results on show here.