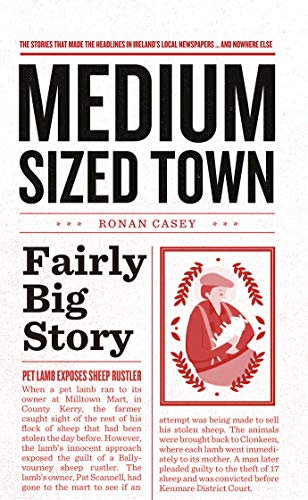 Medium-Sized Town, Fairly Big Story is packed full of unique stories from towns and villages the length and breadth of the country which somehow make the headlines in the local newspaper... and nowhere else.

Medium Sized Town, Fairly Big Story: The Stories that make the Headlines in Ireland's local newspapers.. And nowhere else by Ronan Casey

Medium-Sized Town, Fairly Big Story is a window on the real soul of Ireland, a snapshot of the way we were, the way we are and, hopefully, the way we'll always be.

For anyone with a sense of humour and a taste for the absurd, here are the best of the unique, hilarious stories from towns and villages the length and breadth of the country that made the headlines in the local newspapers ... and nowhere else.

With stories about the dogs in Mountmellick being forced to wear nappies, the Kerry boat-builder who travelled 23 minutes back in time, the pub thieves who escaped through Limerick prison, the Corkman whose most treasured possession is his bucket from the Pope's 1979 visit, and many, many more, Medium-Sized Town, Fairly Big Story showcases the best of Ireland's distinctive humour, personality and wit.

`Ireland's famous wit and charm is often most evident in our local papers and Ronan has unearthed the best of it for this great book.'


`I was laughing just reading some of the headlines!'

`This is a rale good book. A week never passes that I don't buy a few local papers and Ronan has done a savage job bringing some of the best stories from them together here.'

Mick Foster, one half of Foster & Allen

`This book is a great validation of the importance of local newspapers.'

Tony Allen, the other half ...


`Open this book on any page and you'll smile ... it will sit proudly in my toilet for many years to come.'

Currently a fixture on TV3's `Ireland AM' show, Ronan Casey brings the most ludicrous stories from Ireland's local newspapers to air every Friday morning. Perhaps Ireland's only local newspaper addict, he also presented a successful newspaper review for RTE 2FM. A widely experienced broadcaster and journalist, he has written for many national newspapers and has spent over a decade on the frontlines with some of Ireland's best-known local newspapers. He is the author of the critically acclaimed, bestselling biography of the late Joe Dolan for Penguin in 2008. He lives in Mullingar where his wife and two children have evicted him to the garage to indulge his newspaper habit.

Examples of stories: The dogs in Mountmellick forced to wear nappies The Kerry boat builder who travelled 23 minutes back in time The pub thieves who escaped through Limerick prison The giant slugs invading Dundalk footpaths The Corkman whose most treasured possession is his bucket from the Pope's 1979 visit.

GOR009870477
Medium Sized Town, Fairly Big Story: The Stories that make the Headlines in Ireland's local newspapers.. And nowhere else by Ronan Casey
Ronan Casey
Used - Like New
Hardback
Gill
2014-10-10
240
071716201X
9780717162017
N/A
Book picture is for illustrative purposes only, actual binding, cover or edition may vary.
The book has been read, but looks new. The book cover has no visible wear, and the dust jacket is included if applicable. No missing or damaged pages, no tears, possible very minimal creasing, no underlining or highlighting of text, and no writing in the margins.