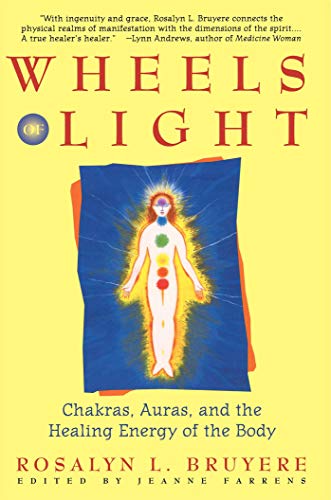 Wheels of Light
by Rosalyn Bruyere

In Stock
$24.99
inc. GST
This is a guide to the human energy field which provides a detailed explanation of the seven major energy centres of the body, known as chakras. In detail, the author explores the basic nature of these forces within us, including what they do and how to work with them.
Very Good Good
7 in stock

Wheels of Light: Chakras, Auras, and the Healing Energy of the Body by Rosalyn Bruyere

This is a guide to the human energy field which provides a detailed explanation of the seven major energy centres of the body, known as chakras. In detail, the author explores the basic nature of these forces within us, including what they do and how to work with them. A major portion of the book is devoted to the first chakra, which is associated with our basic life force, our physical bodies, and sexuality. This section includes: breathing techniques and other exercises for achieving and maintaining balance, a discussion of diseases, association with dysfunctions and suggestions for treatment, and a scientific explanation of how the first chakra energy works.

"A most impressive blend of extensive research and expert personal observation, this book is an absolute must for anyone interested in this subject."-- "Meditation magazine"
"Wheels of Light serves as a bridge between science and mysticism by providing, in well-researched and readable language, essential keys to understanding ourselves and our evolutionary journey."-- "Dan Millman, author of The Way of the Peaceful Warrior"
"We ignore ancient wisdom at our individual and collective peril. Wheels of Light literally helps us find the light. You will finish this book with a profound respect for life."-- "Rita Mae Brown, author of Rubyfruit Jungle"

Rosalyn L. Bruyere is an internationally acclaimed healer, clairvoyant, and medicine woman. Trained as an engineer, she was instrumental in the eight-year research on the human electromagnetic field conducted at UCLA. An ordained minister, she is the founder and director of the Healing Light Center Church in Glendale, California, where she also offers a four-year training program for healers. She lives in Sierra Madre, California.

I Wheels of Light

One: The Ancient and Modern Mystery

The "Mysteries" of the Chakras

Legend of the Rainbow Warrior

Chakras and Their Traditional Components

The Body as a Microcosm

Animal and Elemental Nature of the Chakras

Religious Perspectives of the Chakras

History of Chakras in the West: Theosophists' Theory

The Two Worlds of the Chakras

Three: What Is an Aura?

Vibration, Color, and Harmonics of the Aura

Energy: The Basic Component of the Body

Identical Nature of the Chakras

Location of the Chakras

The Flow of Energy Up the Chakras

Direction of Spin of the Chakras

Relationships Between the Chakras

The Male, Female, Androgyny, and Exogeny in the Chakras

Four: The Chakras and Healing

Scanning the Body and Transmitting or Channeling Energy

Resistance to Being Healed

Meditation on the Chakras

The First Chakra: Our Life Force

Traditional Aspects of the First Chakra

The Bee, the Dragon, the Horse, and the Serpent

Snake Mythology: The Goddess Religion and the Power of the Undulate

Ida and Pengali: Dual Male and Female Aspects of the First Chakra

Initiation and the First Chakra

Kundalini Initiation and the Siddhi Powers

Greece: Initiation in the Tholoi

Egypt: Initiation in the Pyramids

Kundalini and the Nervous System

Breathing and Exercises for the Kundalini

Kundalini and the Mysteries

Suppression of the Life Force

Addictions and the First Chakra

Release of Suppressed Energies and Fixations

Limitations of Too Little Kundalini

Power and the Kundalini

Dual Qualities of the First Chakra: Powers of Spirit and Matter, Life and Death

Kundalini Power in the Ancient and Modem World: Charisma and Humility

The Need for Power in Service

Sexuality and the Spiritual: Mergence with Deity

The Kundalini Center and Karma

Nine: Science and the Chakras

Red on the Oscilloscope

Red in Rolfing and Healing

Sickle-Cell Anemia and Cancer: A Question of Power

Gynecological Problems and the Effects of the Hysterectomy

Listening to the Kundalini

Appendix I: The Rolf Study

GOR001709783
Wheels of Light: Chakras, Auras, and the Healing Energy of the Body by Rosalyn Bruyere
Rosalyn Bruyere
Used - Very Good
Paperback
Simon & Schuster Ltd
1994-04-01
288
0671796240
9780671796242
N/A
Book picture is for illustrative purposes only, actual binding, cover or edition may vary.
The book has been read but remains in clean condition. All pages are intact and the cover is intact. Some minor wear to the spine.