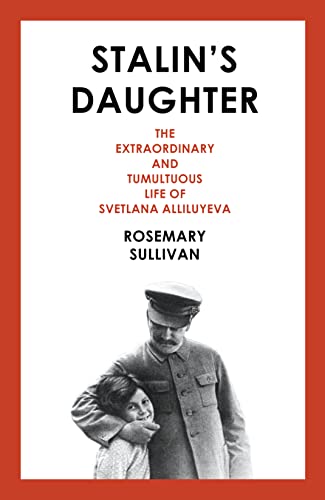 A painstakingly researched, revelatory biography of Svetlana Stalin, a woman fated to live her life in the shadow of one of history's most monstrous dictators - her father, Josef Stalin.

Stalin's Daughter: The Extraordinary and Tumultuous Life of Svetlana Alliluyeva by Rosemary Sullivan

A painstakingly researched, revelatory biography of Svetlana Stalin, a woman fated to live her life in the shadow of one of history's most monstrous dictators - her father, Josef Stalin.

Born in the early years of the Soviet Union, Svetlana Stalin spent her youth inside the walls of the Kremlin. Communist Party privilege protected her from the mass starvation and purges that haunted Russia, but she did not escape tragedy - the loss of everyone she loved, including her mother, two brothers, aunts and uncles, and a lover twice her age, deliberately exiled to Siberia by her father.

As she gradually learned about the extent of her father's brutality after his death, Svetlana could no longer keep quiet and in 1967 shocked the world by defecting to the United States - leaving her two children behind. But although she was never a part of her father's regime, she could not escape his legacy. Her life in America was fractured; she moved frequently, married disastrously, shunned other Russian exiles, and ultimately died in poverty in Spring Green, Wisconsin.

With access to KGB, CIA, and Soviet government archives, as well as the close cooperation of Svetlana's daughter, Rosemary Sullivan pieces together Svetlana's incredible life in a masterful account of unprecedented intimacy. Epic in scope, it's a revolutionary biography of a woman doomed to be a political prisoner of her father's name. Sullivan explores a complicated character in her broader context without ever losing sight of her powerfully human story, in the process opening a closed, brutal world that continues to fascinate us.

`A tremendously exciting and stimulating biography ... Never have I read a biography that reminded my more of a picaresque novel, with its heroine bouncing like a pinball from one location to another, from one bizarre situation to another ... Her life may have been a mess, but this masterful biography shows that it was her mess, and a magnificent mess, too, in its own particular way' Craig Brown, Mail on Sunday *****

`It takes a fine biographer to capture a woman as parti-coloured as this, and Sullivan has produced a delicate, balanced and unforgettably good portrait of a courageous and magnificent woman' Daily Telegraph *****

`What would it mean to be the child of one of the most feared mass murderers in history? Rosemary Sullivan's compelling biography of Svetlana Alliluyeva, Stalin's only daughter, makes an admirable attempt at an answer...The remarkable thing about Stalin's daughter was not that she was imperious, infuriating, batty at times, but that she had survived at all - and survived, as this entertaining book shows, with her dignity and integrity in tact' Sunday Times

`Was Stalin a monster? Oh, yes. The question that threads through this lively intelligent book is a more interesting one, though: can you live with the idea that you are the daughter of a monster?' The Times

`Sullivan controls her widespread canvas and large cast in exemplary fashion. Svetlana was chaotic, exasperating, difficult to the point of impossible - but never boring. She was one of the few credits that you can attribute to Stalin' Book of the Week, Daily Mail

`A biography on an epic scale, with a combination of tragedy and history worthy of a Russian novel. She recreates with clarity and compassion the life of a brave woman' Independent

Rosemary Sullivan has written poetry, short fiction, biography, literary criticism, reviews and articles. Her recent books include the critically acclaimed Villa Air-Bel and Labyrinth of Desire. She is a professor emeritus at the University of Toronto, and has been awarded Guggenheim, Camargo, and Trudeau Fellowships. She is a recipient of the Lorne Pierce Medal awarded by the Royal Society of Canada for her contribution to Literature and Culture, and is an Officer of the Order of Canada.

GOR007045474
Stalin's Daughter: The Extraordinary and Tumultuous Life of Svetlana Alliluyeva by Rosemary Sullivan
Rosemary Sullivan
Used - Very Good
Hardback
HarperCollins Publishers
2015-05-25
752
0007491115
9780007491117
N/A
Book picture is for illustrative purposes only, actual binding, cover or edition may vary.
This is a used book - there is no escaping the fact it has been read by someone else and it will show signs of wear and previous use. Overall we expect it to be in very good condition, but if you are not entirely satisfied please get in touch with us.