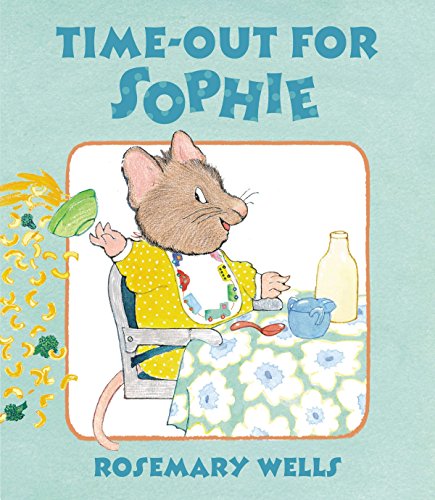 Time-Out for Sophie
by Rosemary Wells

In Stock
$31.99
inc. GST
Although Sophie wants to be helpful and good, sometimes she ignores her mother, father, and grandmother and must have a time-out.
Very Good
Only 1 left

Time-Out for Sophie by Rosemary Wells

Sophie means to be a good little mouse, but she just can't resist testing the limits with her patient parents and grandmother.

Eat supper? More fun to throw it on the floor.
Fold the laundry? More fun to knock over the pile.
Read with Grandma? More fun to steal her glasses.
And then it's time out for Sophie!

Rosemary Wells has created a memorable new character, ready to take her place next to Max and Ruby, Yoko, and Noisy Nora. Sophie's adorable antics will strike a chord with children and parents alike.

Praise for Time-Out for Sophie by Rosemary Wells:

"[A] soon-to-be favorite... Readers will clamor for more of the irrepressible Sophie, while parents will secretly smile--sheer delight." --Kirkus Reviews, starred review

"As wise (and concise) as ever, Wells lets readers have guilt-free fun savoring Sophie's naughtiness, but delivers the story's aha moment with an equally deft hand." --Publishers Weekly

"Wells captures a rite of passage--the terrible twos--both for the little one and for her exasperated parents." --Booklist

Rosemary Wells is the author of many picture books, including those featuring Max and Ruby, the popular bunny siblings who star in their own TV show on Nick Jr.

GOR009591791
Time-Out for Sophie by Rosemary Wells
Rosemary Wells
Used - Very Good
Hardback
Penguin Random House Children's UK
2013-03-27
24
0670785113
9780670785117
N/A
Book picture is for illustrative purposes only, actual binding, cover or edition may vary.
This is a used book - there is no escaping the fact it has been read by someone else and it will show signs of wear and previous use. Overall we expect it to be in very good condition, but if you are not entirely satisfied please get in touch with us.