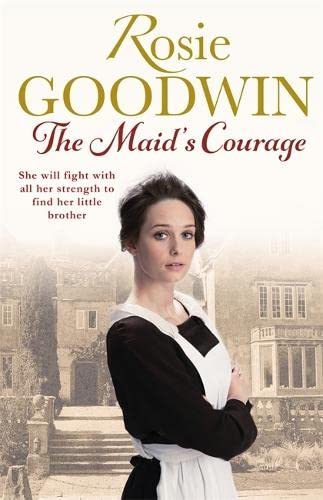 The Maid's Courage
by Rosie Goodwin

Used Price
$40.99
inc. GST
Free Shipping in Australia
Join bestselling and much-loved author, Rosie Goodwin, as she tells the heartwrenching and uplifiting tale of one girl's courage and spirit as she battles to save her family in the face of enormous odds.
Reviews:
Trustpilot
Like New Very Good Good

The Maid's Courage by Rosie Goodwin

Ginny is devastated by the death of her mother, her two little brothers and her sister - but her father is destroyed by the loss. After a series of drunken mistakes, her father is imprisoned for murder, and Ginny and her little brother Charlie lose the only home they've ever known.

Worse is to come. Charlie is only eight years old and has a weak chest. Ginny is determined to keep him with her, but he is taken to the workhouse before she has a chance to save him. Lonely and desperate, Ginny wanders the streets of Nuneaton. She finds honest work at the pie shop - until she is forced to fight off the unwanted advances of the baker and she's out on the streets.

It's only then that she remembers her father's final words - the housekeeper of Lamp Hill Hall will help her. Soon Ginny is employed as a laundry maid, the very lowest rung of the ladder. Her beauty and grace mean that she catches the eye of the house's mistress, who raises Ginny up to play lady's maid to the difficult and demanding Miss Diana. All Ginny wants is to find her brother - and it will take all her strength of heart and courage to bring her family together again.

Goodwin is a master of her craft: she excels in writing about the complexity of relationships, the hardships of life, the ties of family and the joys of love and friendship * Lancashire Evening *
Rosie Goodwin excels at tugging-the-heartstrings * Lincolnshire Echo *
Rosie is a talented storyteller * Dee Williams *

Rosie Goodwin is the author of over twenty bestselling novels. She is also the first author in the world to be allowed to follow three of Catherine Cookson's trilogies with her own sequels. Having worked in the social services sector for many years, she is now a full-time novelist; becoming one of the Top 100 most borrowed authors from UK libraries and regularly appearing in the Heatseekers charts. Rosie lives in Nuneaton, the setting for many of her books, with her husband and their dogs.
Visit www.rosiegoodwin.co.uk to find out more.

GOR010733432
The Maid's Courage by Rosie Goodwin
Rosie Goodwin
Used - Like New
Hardback
Little, Brown Book Group
2016-11-03
480
1472117581
9781472117588
N/A
Book picture is for illustrative purposes only, actual binding, cover or edition may vary.
The book has been read, but looks new. The book cover has no visible wear, and the dust jacket is included if applicable. No missing or damaged pages, no tears, possible very minimal creasing, no underlining or highlighting of text, and no writing in the margins.