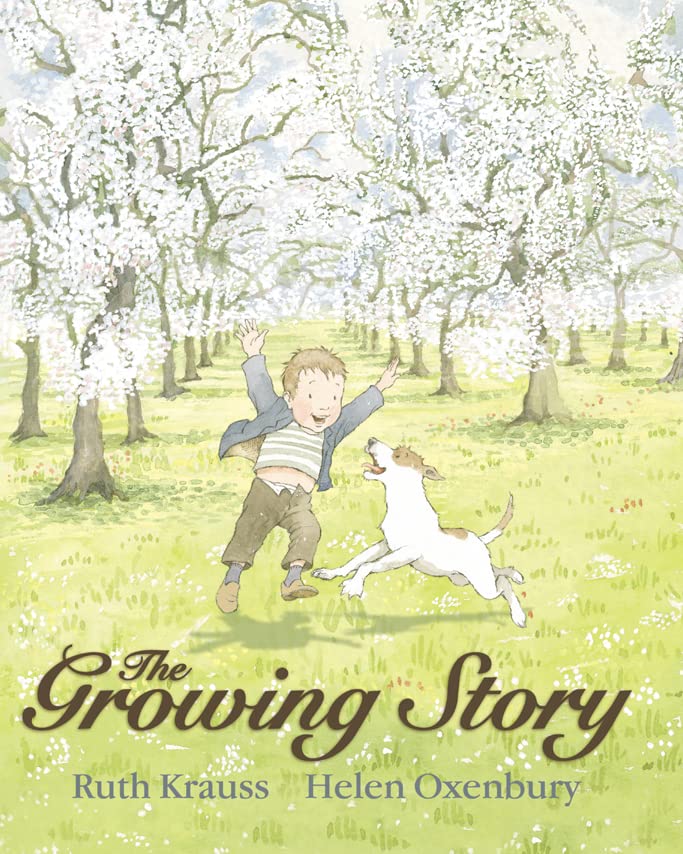 The Growing Story
by Ruth Krauss

A classically beautiful picture book from Helen Oxenbury and Ruth Krauss. Share the universal experience of growing up and discover the rhythms of the seasons in this wonderfully timeless story.

The Growing Story by Ruth Krauss

A classically beautiful picture book from Helen Oxenbury and Ruth Krauss. Share the universal experience of growing up and discover the rhythms of the seasons in this wonderfully timeless story.

A little boy, some chicks and a puppy live on a farm. They see the first signs of spring growing in the fields and the little boy asks his mother if he and the puppy will grow too. Of course you will, she assures him, and as spring turns to summer he sees his dog growing taller and the chicks become chickens. But as the seasons change and everything grows around him, the little boy feels like he has stayed the same. Can he really be growing too?

This charming story will enchant younger readers and is perfect for sharing aloud. Beautifully presented as an illustrated hardback, it will make the perfect gift for all little children wondering if they're growing too.

Praise for The Growing Story:

`A book to treasure.' Irish Examiner

Praise for `We're Going On a Bear Hunt' by Michael Rosen and Helen Oxenbury:

`Beautifully produced, written and illustrated, this is a classic work for any age at any period.' The Independent on Sunday

Praise for `Alice's Adventures in Wonderland' by Lewis Carroll and Helen Oxenbury:

`Simply one to own.' The Times

Ruth Krauss, a member of the experimental Writer's Laboratory at the Bank Street School in New York City in the 1940s, imaginatively used humour and invented words to create some of the very first books for children that highlighted the child's inner life. She collaborated with some of the greatest illustrators in children's literature, including Maurice Sendak, who described her as a `giant' in children's literature, and her husband, Crockett Johnson.

Helen Oxenbury grew up in Ipswich, England, and has always loved nothing more than drawing. She studied costume design and then worked on stage sets for theatre, film and TV. After marrying John Burningham, another eminent illustrator, she began illustrating children's books and has gone on to win several prestigious awards and wide-spread critical acclaim for her work.

GOR001733082
The Growing Story by Ruth Krauss
Ruth Krauss
Used - Very Good
Hardback
HarperCollins Publishers
2007-05-01
40
0007233329
9780007233328
N/A
Book picture is for illustrative purposes only, actual binding, cover or edition may vary.
This is a used book - there is no escaping the fact it has been read by someone else and it will show signs of wear and previous use. Overall we expect it to be in very good condition, but if you are not entirely satisfied please get in touch with us.