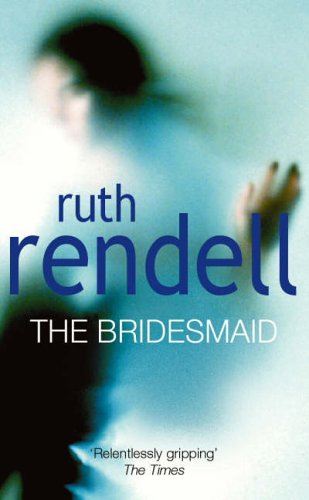 The Bridesmaid
by Ruth Rendell

In Stock
$16.49
inc. GST
Philip Wardman had more than just the ordinary squeamishness where death was concerned. Philip's feminine ideal is the statue of the Roman goddess Flora in his mother's garden. The two embark on a passionate affair that soon becomes dangerous when Senta sets Philip a test;
Very Good Good
6 in stock

The Bridesmaid by Ruth Rendell

Philip Wardman had more than just the ordinary squeamishness where death was concerned. Yet he could hardly avoid the suspicious disappearance of his sister's friend Rebecca Neave, especially when everyone was ascribing the cause to murder. Philip's feminine ideal is the statue of the Roman goddess Flora in his mother's garden. His marble Flora doesn't fade, doesn't alter, doesn't die. But then he meets Senta Pelham, a beautiful, sensual, childlike actress and a living incarnation of the statue. The two embark on a passionate affair that soon becomes dangerous when Senta sets Philip a test; to prove their love, they must each commit murder.

"A young man refurbishes suburban homes, lives with his mother and sister, becomes obsessed with a garden nymph statue and then dangerously infatuated with its living lookalike. This relationship is emotional, erotic and vampiric, with him as the victim" * Guardian *
"Every sentence is appallingly, shockingly convincing . . . a memorably harrowing journey through sick and weak minds, written with a skill that makes it relentlessly gripping" * The Times *
"To read her at her best - and The Bridesmaid is perhaps her best book - is like stepping on to a trundling country bus and feeling it turn into a roller coaster" * Sunday Times *
"If Ruth Rendell were not slotted into the category of writer of mystery novels, she would have won the Booker long ago" * Books of the Year, Evening Standard *
"Ruth Rendell, like all the great creators of crime fiction, keeps her pact with the reader. There's a murder mystery, there are clues, there is a solution. It's a very satisfying read" * Giles Brandreth *

GOR000514739
The Bridesmaid by Ruth Rendell
Ruth Rendell
Used - Very Good
Paperback
Cornerstone
1990-04-05
304
0099681803
9780099681809
N/A
Book picture is for illustrative purposes only, actual binding, cover or edition may vary.
This is a used book - there is no escaping the fact it has been read by someone else and it will show signs of wear and previous use. Overall we expect it to be in very good condition, but if you are not entirely satisfied please get in touch with us.