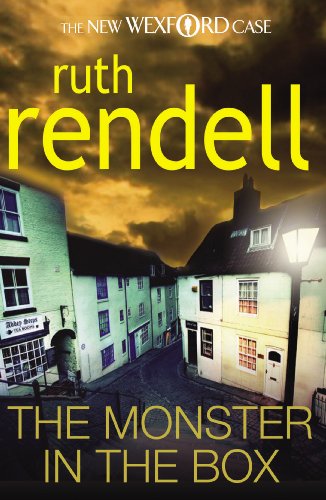 The Monster in the Box
by Ruth Rendell

Used Price
$13.69
inc. GST
Free Shipping in Australia
The twenty-second book to feature the classic crime-solving detective, Chief Inspector Wexford. The villainous Targo is not the only ghost from Wexford's past who has re-emerged to haunt him in the here and now...
Reviews:
Trustpilot
Very Good Good

The Monster in the Box Summary

The Monster in the Box: (A Wexford Case) by Ruth Rendell

The twenty-second book to feature the classic crime-solving detective, Chief Inspector Wexford. Wexford had almost made up his mind that he would never again set eyes on Eric Targo's short, muscular figure. And yet there he was, back in Kingsmarkham, still with that cocky, strutting walk. Years earlier, when Wexford was a young police officer, a woman called Elsie Carroll had been found strangled in her bedroom. Although many still had their suspicions that her husband was guilty of her violent murder, no one was convicted. Another woman was strangled shortly afterwards, and every personal and professional instinct told Wexford that the killer was still at large. And that it was Eric Targo. A psychopathic murderer who would kill again... As the Chief Inspector investigates a new case, Ruth Rendell looks back to the beginning of Wexford's career as a detective, even to his courtship of the woman who would become his wife. The villainous Targo is not the only ghost from Wexford's past who has re-emerged to haunt him in the here and now...

Customer Reviews - The Monster in the Box

The Monster in the Box Reviews

"Yet further proof of Rendell's amazing criminal mastery" * Evening Standard *
"[Targo] is as good a villain as Wexford ever tried to pin down . . . hauntingly nasty" * Spectator *
"Targo haunted this world, as he haunts the reader: the monster is out of the box and it's impossible to put him back once this book has been closed" * Independent *
"One of the best-written detective series in the genre's history . . . At any time we can return to Kingsmarkham to explore the darker side of humanity with Wexford as our reassuring and humane guide" * Washington Post *
"Ruth Rendell is marvellous at psychological tension... She knits all the threads together with a casual flourish that shows veteran expertise" * Sunday Times *

GOR001988292
The Monster in the Box: (A Wexford Case) by Ruth Rendell
Ruth Rendell
Wexford
Used - Very Good
Paperback
Cornerstone
2010-08-02
352
0099548224
9780099548225
N/A
Book picture is for illustrative purposes only, actual binding, cover or edition may vary.
This is a used book - there is no escaping the fact it has been read by someone else and it will show signs of wear and previous use. Overall we expect it to be in very good condition, but if you are not entirely satisfied please get in touch with us.