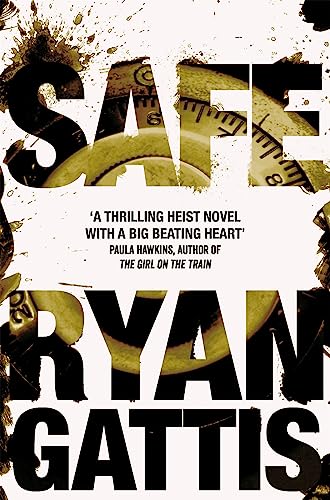 Used Price
$34,99
inc. GST
Free Shipping in Australia
From the acclaimed author of the remarkable All Involved, an LA noir thriller full of twists and turns, a cat and mouse chase between two narrators, where nothing is quite what it seems.
Reviews:
Trustpilot
Like New Very Good

Set in LA against the backdrop of the 2008 financial crash, this is the story of Rudy Reyes (a.k.a. Glasses), a gangster-turned-double-agent who wants out of the high-stakes high-risk life criminal life, and Ricky Mendoza, Junior (a.k.a. Ghost), a DEA safe-cracker with terminal cancer who's got nothing to lose. When Ghost goes rogue and steals thousands of dollars from a safe that belongs to an LA crime lord who happens to be Glasses' boss, he endangers a deal Glasses had with the DEA. As Ghost sets out to steal as much money as he can get his hands on - all with the plan to give it to those hit hardest by the crash - and the Mob gets ever closer to catching him, Glasses tries desperately to keep his plans on track.

Fast-paced and gritty, Safe by Ryan Gattis is both a moving and human morality tale and an utterly immersive and heart-stoppingly suspenseful thriller.

A thrilling heist novel with a big beating heart -- Paula Hawkins, author of Girl on the train
Without glamorizing his subject, there's a lyricism in the vernacular and street language that makes it hard not to be moved * GQ *
Safe is an immensely satisfying crime thriller, but it is also a deeply moving novel about one flawed man's attempt to create good in a corrupt world. Ryan Gattis has a great ear for the patois of the street, and he reminds us that in 21stcentury America the worst predators often wear suits and work in offices. -- Ron Rash, author of Serena
SAFE is a propulsive thriller that confirms Ryan Gattis as one of our most gifted novelists. The book has unstoppable momentum yet is as finely layered and detailed with the gritty truth of life and the streets as I've ever read. It shoots you down a path that is fraught with surprise and insight, and you can't ask for more than that. -- Michael Connelly, creator of the Harry Bosch and Mickey Haller series.
Engrossing ... Gattis's refreshingly smart characters doggedly try to do the right thing in this satisfying upbeat tale of the drug world. * Publisher's Weeekly *
Combining All Involved's facility for tenderness in the midst of stories of brutality, Safe is the perfect read to have in your suitcase * GQ *
Ryan Gattis has a feel for street slang and nimble characterisation. A bobby-dazzler of a thriller. * Metro *
Inherently compelling. This macho, faster-than-a-speeding-bullet novel benefits from the extensive research Gattis has done on the L.A. gang scene and that deep knowledge informs electrifying plot twists. * Time *
A literary novel and a thriller with more twists than a DVD box-set make quite a combination. There is a lathed quality to Ryan Gattis's prose, which is reminiscent of Raymond Carver or Ernest Hemingway. Gattis is superb with the staccato sentence, honed to a few words. I have previously been enthusiastic about Gattis's polyphonic All Involved; this duet shows he is as assured on a closer frame. * The Scotsman *
No ordinary gangster cat-and-mouse chase . . . While the gangsters-with-a-heart story might sound improbable, Gattis compensates with whip-smart vernacular and a narrative that zips along. Gattis has created a gripping novel about opportunity, transformation and hope. * Observer *

Ryan Gattis is the author of Kung Fu and All Involved, which won the American Library Association's Alex Award and the Lire Award for Noir of the Year in France. Gattis lives and writes in Los Angeles, where he is a member of the street art crew UGLARworks and a founding board member of 1888, a Southern California literary arts non-profit.

GOR009797571
Safe by Ryan Gattis
Ryan Gattis
Used - Like New
Paperback
Unknown
0
1509843787
9781509843787
N/A
Book picture is for illustrative purposes only, actual binding, cover or edition may vary.
The book has been read, but looks new. The book cover has no visible wear, and the dust jacket is included if applicable. No missing or damaged pages, no tears, possible very minimal creasing, no underlining or highlighting of text, and no writing in the margins.