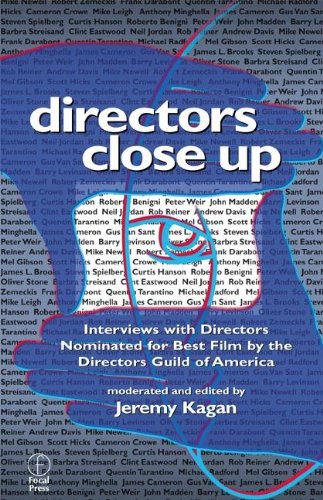 Directors Close Up
by S. Richards

Directors Close Up: Interviews With Directors Nominated for Best Film By the Directors Guild of America by S. Richards

The edited selections in this book are taken from in-depth discussions exploring the complex process of directing. These began in 1992 when The Directors Guild of America launched a series of yearly seminars with the nominees for outstanding feature film directing.

The structure of each of these discussions followed the stages of filmmaking that the director supervises, concentrating on creative and pragmatic issues: script development, pre-production, production, and post-production. A short chapter follows, where each director touches on what they feel to be the best and worst part of being a director. Finally, the book concludes with a lecture given by Elia Kazan on "What Makes a Director," which he gave at Wesleyan University in 1973. It remains one of the most elegant declarations of the characteristics of all directors.

"Jeremy Kagan's Directors Close Up is a compendium of engaging, informative, insightful interviews with film directors who were each nominated for "Best Film" by the Directors Guild of America. A highly recommended addition to any academic, professional, and community library film studies collection, Directors Close Up is a fascinating and informative work will entertain film buffs, educate film school students, and tutor aspiring directors." - Bookwatch, September 2000

"It's fascinating, if for no other reason than offering insight into some powerful egos." - Robert Goodman, Videography, July 2000

"The volume is filled with intriguing insights into the process of filmmaking by many of the world's most acclaimed directors, including Steven Spielberg, James Cameron, Robert Zemeckis, Barry Levinson, Oliver Stone, Peter Weir, Quentin Tarantino and 14 others." - Variety, September 2000

'It's not often the world's biggest directors are this honest and open about what they do...Buy it. A classic for dipping into.' - Alex Norris, ON THE SHELF

'The interview structure allows for far more depth and focus than most outsider's analyses can produce. Recommended for any library collection with a film or arts department. - Bookwatch, November 2000

Introduction; "How I Got Here"; The Script; Pre-Production; Production; Post-Production; The Best and Worst; Film Biographies; Elia Kazan: On What Makes a Director

GOR003313784
Directors Close Up: Interviews With Directors Nominated for Best Film By the Directors Guild of America by S. Richards
S. Richards
Used - Good
Paperback
Taylor & Francis Ltd
2000-06-15
248
0240804066
9780240804064
N/A
Book picture is for illustrative purposes only, actual binding, cover or edition may vary.
The book has been read but remains in clean condition. All pages are intact and the cover is intact. Some minor wear to the spine.