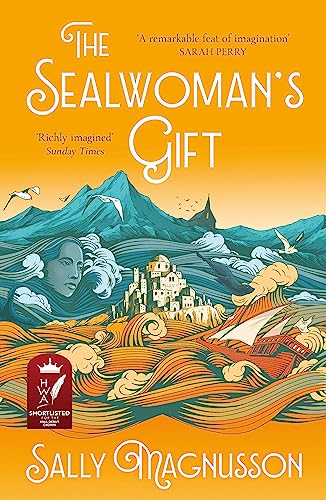 The Sealwoman's Gift
by Sally Magnusson

1627. In a notorious historical event, pirates raided the coast of Iceland and abducted 400 people into slavery in Algiers. Among them a pastor, his wife, and their children.

In her acclaimed debut novel Sally Magnusson imagines what history does not record: the experience of Asta, the pastor's wife, as she faces her losses with the one thing left to her - the stories from home - and forges an ambiguous bond with the man who bought her. Uplifting, moving, and sharply witty, The Sealwoman's Gift speaks across centuries and oceans about loss, love, resilience and redemption.

'Sally Magnusson has taken an amazing true event and created a brilliant first novel. It's an epic journey in every sense: although it's historical, it's incredibly relevant to our world today. We had to pick it' Zoe Ball Book Club

'Richly imagined and energetically told' Sunday Times
'The best sort of historical novel' Scotsman
'Compelling ' Good Housekeeping
'An accomplished and intelligent novel' Yrsa Sigurdardottir, author of Why Did You Lie?
'Vivid and compelling' Adam Nichols, co-translator of The Travels of Reverend Olafur Egilsson

From the first, it leaps from the page... I found myself absolutely persuaded by Asta's extraordinary journey from the harsh Icelandic coast to the strange and splendid palaces of Algiers. I enjoyed and admired it in equal measure * Sarah Perry, author of THE ESSEX SERPENT *
A remarkable feat of imagination that transports the reader to 17th-century Iceland and Algiers ... an extraordinarily immersive read that emphasises the power of stories, examining themes of motherhood, identity, exile and freedom. Through her deft storytelling, Magnusson takes us on a journey that not only crosses continents, but encompasses tragedy and rich sensuality. -- Sian Norris * Guardian *
An evocative, striking new novel ... which brings an Icelandic historical tragedy, and in particular, Icelandic woman Asta Egilsson, back to pulsing life. -- Stephen McGinty * Times *
Moving, accomplished ... Richly imagined and energetically told, The Sealwoman's Gift is a powerful tale of loss and endurance * Sunday Times *
Magnusson has certainly done her research, and she has found in the silences of the historical record the space for a novel that moves gracefully between what is known and what must be imagined...Much of the pleasure of reading The Sealwoman's Gift is that of a good yarn well told. * TLS *
Fascinating ... a really, really good read * BBC Radio 2 Book Club *
Sally Magnusson has turned this grim true story into a page-turner...beautifully told. * Radio Times *
Sally Magnusson has taken an amazing true event and created a brilliant first novel. It's an epic journey in every sense: although it's historical, it's incredibly relevant to our world today. * Zoe Ball Book Club *
Sally Magnusson writes compellingly of the psychological and physical shocks of being uprooted. Impeccably researched, this is a poetic retelling of Icelandic history. * Daily Mail *
Sally Magnusson's wonderfully accomplished first novel is an enthralling mixture of recovered history and the imagining of lost lives. It's a delightful piece of storytelling which is also a story about telling stories ... In short, this is the best sort of historical novel * Scotsman *
This is the best sort of historical novel. It respects the past and brings it alive. * The Scotsman *
Icelandic history has been brought to extraordinary life. I was swept up in the story and the vivid plight of people taken away from everything they knew and understood. An accomplished and intelligent novel. * Yrsa Sigurdardottir, author of WHY DID YOU LIE? *
'Sally Magnusson has taken a little-known historical event - the Barbary corsair raid on Iceland in 1627 - and produced a moving story of suffering and redemption. Her tale of Asta, the Reverend's wife, indomitable survivor of tragedy and heartbreak, is vivid and compelling' -- Adam Nichols
A rich, captivating work * Mail on Sunday *
Engrossing, atmospheric * Sunday Express *
Compelling stuff * Good Housekeeping *
A lyrical tale full of the Icelandic stories that Asta tells her children and her kidnappers * Stylist *
Remarkably accomplished...The true story behind the novel is almost preposterously epic, yet she brings it to life by inhabiting the minds of her characters -- David Robinson * The Scotsman *
Sally Magnusson's wonderfully accomplished first novel is an enthralling mixture of recovered history and the imagining of lost lives. It's a delightful piece of storytelling which is also a story about telling stories. * Yorkshire Post *
A compelling read...While a historical novel, it also contains contemporary resonances, particularly in the way it examines how different people integrate into a society that is completely foreign to them -- Caroline Sanderson * The Bookseller *
An astonishing novel that will stay with me for a long time...Asta Thorsteinsdottir is a truly remarkable and resourceful heroine -- Waterstones Book Blog
An impressive debut from Magnusson who seems to have inherited her Icelandic ancestors' talent for beguiling storytelling * The Herald *
Magnusson's prose never falters ... What an exceptional and moving fiction debut this is. * Elle Thinks blog *
An engrossing and accomplished novel * The Last Word Book Review *
There's something so wonderful about being wholly drawn into a richly imagined historical novel that both illuminates a somewhat forgotten or not-widely-known period of history and gives voice to people who are only glancingly referred to in the history books ... this novel brilliantly engages with many of the heartrending conflicts a woman in Asta's position must have faced while also powerfully illuminating the cultural importance of storytelling and the complicated dynamics of love * Lonesome Reader *
Packed with detail and characters, Sally's immersive prose and precise observations entwine you in the action and emotion of this dramatic tale. An absolute triumph of imagination * Press Association *
Inspired by the country's literary sagas, the novel's heart-wrenching fiction is built around the bloodied bones of fact, words hauled from written records of the 17th century * Sunday Post *
Much more than simply a vividly-imagined historical novel, but a personally touching meditation on the choices we're forced to make in life * Lonesome Reader *
Captivating * Scots Magazine *
This psychological depth, along with engaging prose and meticulous research into the history on which this novel is based, makes The Sealwoman's Gift another contender for my books of the year * Annethology *
Excellent * Dumfries and Galloway Life *
accomplished...enthralling...This is the best sort of historical novel -- Allan Massie * The Scotsman *
I have been banging the drum for The Sealwoman's Gift for a solid year now, still recommending it to every person I possibly can - and it was the first book on this list, the only absolute certainty from the beginning. A stunning debut novel, it is based on the true story of 17th century Icelanders who were kidnapped and sold as slaves in North Africa. The writing is beautiful, the sense of time and place once again at the top of the author's list of many talents, and the magical-realism of the Sealwoman utterly convincing. * Cultured Vultures *

Bestselling author, journalist and broadcaster Sally Magnusson has written several books for adults and children, most recently her Sunday Times bestseller Where Memories Go (2014) about her mother's dementia, and The Sealwoman's Gift (2018), her acclaimed debut novel. Sally has inherited a rich storytelling tradition from her Scottish and Icelandic forebears. The Sealwoman's Gift was a Radio 2 Book Club and ITV Zoe Ball Book Club selection, and was shortlisted for the Authors' Club Best First Novel Award, the Saltire Fiction Book of the Year, the Paul Torday Memorial Prize, the McKitterick Prize, the Waverton Good Read Award and the HWA Debut Fiction Crown. Sally lives outside Glasgow. Loch Katrine and the surrounding area have long been a favourite haunt.

GOR009234548
The Sealwoman's Gift: the Zoe Ball book club novel of 17th century Iceland by Sally Magnusson
Sally Magnusson
Used - Very Good
Paperback
John Murray Press
2018-06-12
384
1473638984
9781473638983
N/A
Book picture is for illustrative purposes only, actual binding, cover or edition may vary.
The book has been read, but looks new. The book cover has no visible wear, and the dust jacket is included if applicable. No missing or damaged pages, no tears, possible very minimal creasing, no underlining or highlighting of text, and no writing in the margins.