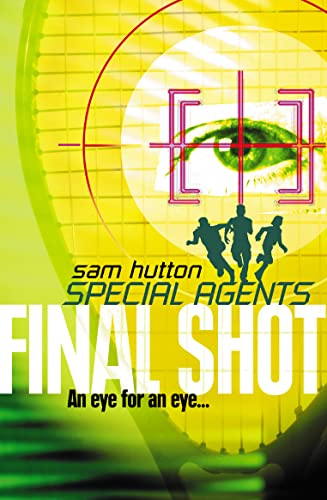 Second title in this cutting-edge crime series for teenage readers. Three teenage protagonists in the elite PIC unit of Special Branch, fight crime on the streets of London.

Second title in this cutting-edge crime series for teenage readers. Three teenage protagonists in the elite PIC unit of Special Branch, fight crime on the streets of London.

The tennis championships at Wimbledon and something horrible is about to happen to Will Anderson, the British Number One. During the course of a murder investigation, police find photos of Will in a derelict London flat, and in all of them, his eyes are missing. The police to realise with horror that Will is about to be the murderer's next victim.

Luckily for Will, he is young, attractive and single and has just met Maddie at a party. Maddie is one of three teenage detectives in the Police Investigation Command unit of Special Branch, so who better to protect the British ace? With the help of colleagues Alex and Danny - the electronics whizz kid - Maddie battles desperately to save Will's life.

Special Agents: They're good; they're bright and they're out to crack crime in London

Sam Hutton is the pseudonym for Allan Frewin Jones. Jones is the author of many book series, including "The Six Crowns," "Destiny's Path," "The Faerie Path," "Talisman," and more.

GOR000660076
Final Shot (Special Agents, Book 2) by Sam Hutton
Sam Hutton
Special Agents
Used - Very Good
Paperback
HarperCollins Publishers
2003-08-04
224
0007148445
9780007148448
N/A
Book picture is for illustrative purposes only, actual binding, cover or edition may vary.
This is a used book - there is no escaping the fact it has been read by someone else and it will show signs of wear and previous use. Overall we expect it to be in very good condition, but if you are not entirely satisfied please get in touch with us.