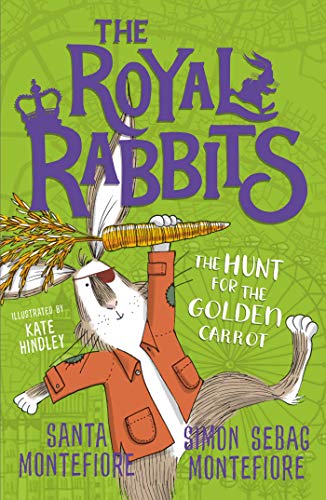 The Royal Rabbits: The Hunt for the Golden Carrot
by Santa Montefiore

In Stock
$18.49
inc. GST
The Royal Rabbits are hopping into action again in this NEW book in the bestselling series!
Very Good
Only 1 left

The Royal Rabbits: The Hunt for the Golden Carrot Summary

The Royal Rabbits: The Hunt for the Golden Carrot by Santa Montefiore

'Packed with fun, fantasy and the sort of adventure guaranteed to have sticky little fingers hungrily turning the pages' The Mail on Sunday
'The Royal Rabbits of London is sweet, funny and beautifully illustrated' The Times

The adventure continues for Shylo and his Royal Rabbit friends in this charming series from bestselling authors Santa Montefiore and Simon Sebag Montefiore and illustrator Kate Hindley, which shows that even the smallest rabbit can be the biggest hero.

Life is an adventure. Anything in the world is possible - by will and by luck, with a moist carrot, a wet noise and a slice of mad courage!

Now that Shylo is a Royal Rabbit, his life is full of adventure and new friends, but he still misses his mother and family. So he jumps at the chance to visit his home warren!

As soon as Shylo arrives he finds something strange and dark going on. A mysterious bunny called Harlequin is on the farm, attracting many followers with his crazy singing and loopy dancing. But Harlequin is also digging for the Golden Carrot, which, says an ancient legend, will give him power over over all humans and animals. Harlequin believes it's buried somewhere on the farm. Then as more followers flock to the warren, Shylo wonders if the hunt for the Golden Carrot is a fun game or if Harlequin is plotting world domination...

And when the quest turns deadly, Shylo calls in the Royal Rabbits. Can they stop power-mad Harlequin? And who will find the Carrot first?

Born in England in 1970, Santa Montefiore grew up in Hampshire. She is married to writer Simon Sebag Montefiore. They live with their two children, Lily and Sasha, in London. Visit her at www.santamontefiore.co.uk. Simon Sebag Montefiore's bestselling and prize-winning books are now published in over forty-five languages and he has won prizes for both his histories and his novels. In non-fiction, he is the author of The Romanovs: 1613-1918, Catherine the Great & Potemkin, Young Stalin, Stalin: the Court of the Red Tsar, and Jerusalem: the Biography. He is also the author of the Moscow Trilogy of novels Sashenka, Red Sky at Noon and One Night in Winter which won the Best Political Novel of the Year Prize and was longlisted for the Orwell Prize. With his wife Santa Montefiore, he is the author of the children's Royal Rabbits of London series. Follow Simon on Twitter at @SimonMontefiore. For more information visit SimonSebagMontefiore.com.

GOR010743159
The Royal Rabbits: The Hunt for the Golden Carrot by Santa Montefiore
Santa Montefiore
The Royal Rabbits
Used - Very Good
Paperback
Simon & Schuster Ltd
2020-08-06
240
1471171523
9781471171529
N/A
Book picture is for illustrative purposes only, actual binding, cover or edition may vary.
This is a used book - there is no escaping the fact it has been read by someone else and it will show signs of wear and previous use. Overall we expect it to be in very good condition, but if you are not entirely satisfied please get in touch with us.