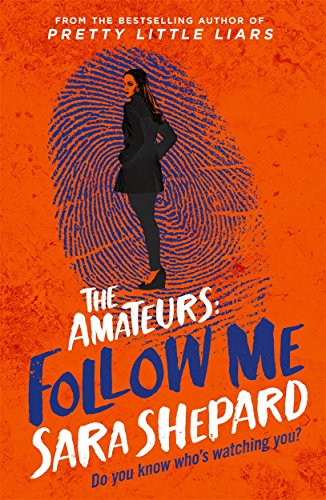 Used Price
$18.49
inc. GST
Free Shipping in Australia
Chelsea looks exactly like her friend Aerin Kelly's murdered sister - and Seneca's own mother, who was killed five years ago. Seneca's suspicions are confirmed when the killer contacts her, threatening to hurt Chelsea if Seneca goes to the police with what she knows.
Reviews:
Trustpilot
Very Good

'A classic whodunit with a contemporary edge' Cecily Von Ziegesar, praise for The Amateurs Everyone knows Chelsea Dawson. Day and night, her tens of thousands of followers on Instagram watch her every move. So when she goes missing from the sunny beachside town of Lafayette, it makes headlines. The police are searching everywhere for her kidnapper, but when eighteen-year-old Seneca Frazier sees Chelsea's picture, she knows instantly who took her. Chelsea looks exactly like her friend Aerin Kelly's murdered sister - and Seneca's own mother, who was killed five years ago. Seneca's suspicions are confirmed when the killer contacts her, threatening to hurt Chelsea if Seneca goes to the police with what she knows. Seneca makes the only move she can, reaching out to Aerin and Maddox and Madison Wright, her friends from Case Not Closed, an amateur crime-solving community. Together they go to Lafayette to work the case, to save Chelsea, and to bring the killer to justice. But the killer has a plan of his own. He wants Seneca and her friends in Lafayette, but he wants them to play by his rules. One wrong step could mean the end for Chelsea - or the Amateurs. The second book in the thrilling new crime series from bestselling author Sara Shepard.

For as long as she can remember, Sara Shepard has been writing. However, when she was young she also wanted to be a soap opera star, a designer for LEGO, a filmmaker, a claymation artist, a geneticist, and a fashion magazine editor when she grew up. She and her sister have been creating joint artistic and written projects for years, except they're pretty sure they're the only ones who find them funny. She got her MFA at Brooklyn College and now lives in Pittsburgh, PA with her husband and two children. Sara Shepard is the author of two New York Times bestselling series, Pretty Little Liars and The Lying Game, as well as the series The Perfectionists. Visit her at www.saracshepard.com and follow her on Twitter and Snapchat at @sarabooks and on Instagram at saracshepard.

GOR008683669
Follow Me: The Amateurs 2 by Sara Shepard
Sara Shepard
The Amateurs
Used - Very Good
Paperback
Hot Key Books
2017-09-27
288
1471406326
9781471406324
N/A
Book picture is for illustrative purposes only, actual binding, cover or edition may vary.
This is a used book - there is no escaping the fact it has been read by someone else and it will show signs of wear and previous use. Overall we expect it to be in very good condition, but if you are not entirely satisfied please get in touch with us.