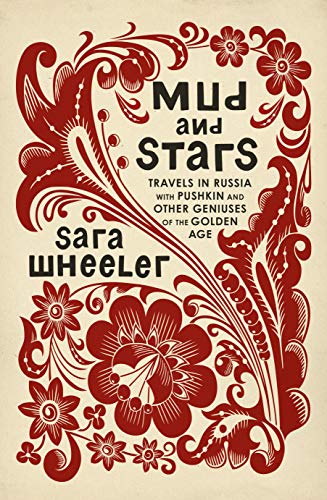 Mud and Stars by Sara Wheeler

She also spends months in fourth-floor 1950s apartments, watching television with her hosts, her new friends bent over devices and moaning about Ukraine.

At a time of deteriorating relations between Russia and the West, Wheeler searches for a Russia not in the news - a Russia of humanity and daily struggles.

Mud and Stars: Travels in Russia with Pushkin and Other Geniuses of the Golden Age by Sara Wheeler

There is a literal Russian landscape, and there is its emotional, literary counterpart. In Mud and Stars, award-winning writer Sara Wheeler sets out to explore both.

With the writers of the Golden Age as her guides - Pushkin, Tolstoy, Gogol and Turgenev, among others - Wheeler travels across eight time zones, from rinsed north-western beetroot fields and far-eastern Arctic tundra to the cauldron of ethnic soup that is the Caucasus. She follows nineteenth-century footsteps to make connections between then and now: between the places where flashing-epauletted Lermontov died in the aromatic air of Pyatigorsk, and sheaves of corn still stand like soldiers on a blazing afternoon, just like in Gogol's stories. On the Trans-Siberian railway in winter she crunches across snowy platforms to buy dried fish from babushki, and in summer she sails the Black Sea where dolphins leapt in front of violet Abkhazian peaks. She also spends months in fourth-floor 1950s apartments, watching television with her hosts, her new friends bent over devices and moaning about Ukraine.

At a time of deteriorating relations between Russia and the West, Wheeler searches for a Russia not in the news - a Russia of humanity and daily struggles. She gives voice to the 'ordinary' people of Russia, and discovers how the writers of the Golden Age continue to represent their country today.

Wheeler's writing is full of...strong detail; her drily witty sentences snap like sushki, the crunchy sugared bread rings Russians east with their coffee. Mud and Stars is a pleasure to read slowly... her modest, ungrand tour, with its rich map of extraordinary writers and "ordinary" Russians...is far more of an epic than it at first appears. * Daily Telegraph *
[A] literary romp in the footsteps of [Russia's "big beast" 19th-century] writers - which does not skimp on detail or seriousness... I approached this book thinking that it would be - along with Elif Batuman's The Possessedand Viv Groskop's The Anna Karenina Fix - the third in a recent hattrick of women's journeys through Russian literature. Wheeler goes beyond these books by travelling to the backwaters of Russia so that we don't have to - we can continue to travel in the comfort of our armchair through the pages of the masterpieces that the great writers left behind. * The Times *
The image many westerners have of Russia is an unflattering one, heavy on totalitarianism and repression. Sara Wheeler offers an important corrective. Part literary criticism, part travelogue, her fascinating book... is as enthusiastic and authoritative a guide as one could wish for. * Guardian *
Well informed and independent-minded... [Mud and Stars is] an intelligent inquiry into the human condition itself... Wheeler is also side-splittingly funny in her breaking of taboos. * Times Literary Supplement *
Wheeler is a determined traveller, roving well beyond the itinerary of tourist Russia... [she has] an insight into a random sample of contemporary Russians - how they live, what they think. The outcome is a book that is enjoyable and enlightening in equal measure. * Tablet *
Sara Wheeler's travel books include Terra Incognita: Travels in Antarctica (1997), The Magnetic North: Travels in the Arctic (2010) and Access All Areas: Selected Writings 1990-2010 (2011). She has also written biographies of Apsley Cherry-Garrard and Denys Finch Hatton, and O My America!, about women who travelled to America in the nineteenth century.
GOR009836228
9780224098014
0224098012
Mud and Stars: Travels in Russia with Pushkin and Other Geniuses of the Golden Age by Sara Wheeler
Sara Wheeler
Used - Very Good
Hardback
Vintage Publishing
2019-07-04
304
N/A
Book picture is for illustrative purposes only, actual binding, cover or edition may vary.
This is a used book - there is no escaping the fact it has been read by someone else and it will show signs of wear and previous use. Overall we expect it to be in very good condition, but if you are not entirely satisfied please get in touch with us
Trustpilot