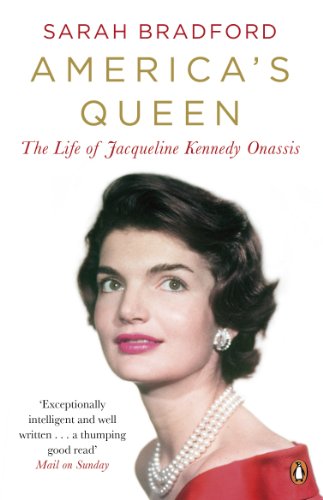 Jackie Kennedy was a twentieth-century icon of glamour, elegance and grace. As the beautiful young wife of President John F. Kennedy, she was adored, her style imitated across the world.

But beneath the perfection of her public life lay contradiction, passion, and, all to often, tragedy. Sarah Bradford's brilliant new biography not only gives a fascinating account of her time with JFK, but also of her life after his assassination in 1963, in all its colour and controversy.

There has not been, nor will there be, a better biography of Jackie * Times Literary Supplement *
Exceptionally intelligent and well-written . . . a thumping good read * Daily Mail *
The definitive biography -- Anthony Howard * Sunday Times *
A timely reminder of the contradictory and complicated character of the First Lady . . . a revealing portrait * Daily Mail *
Long before Diana Spencer, Jacqueline Kennedy was the world's ultimate fantasy princess . . . In public, at JFK's side, Jackie's air of breathless sophistication, her chic cultural warmth complemented [him] perfectly. In private she could be softly malicious . . . scurrilously funny, and full of the entertaining intolerance of those who are young, rich, beautiful . . . a lucid, well-written new biography * Guardian *
A masterly biography * Daily Telegraph *
Sarah Bradford is very good, and very detailed, about the Kennedys. A good biography, and a good history * Evening Standard *
Bradford has a real grasp of history and the ability to make it spark into new life -- Anne Chisholm * Sunday Telegraph *
Bradford's forte, ever since she was a history-mad girl, is thinking herself into other lives * Daily Telegraph *

Sarah Bradford is a historian and biographer. Previous books include biographies of Disraeli, George VI, Elizabeth II and Jacqueline Kennedy Onassis (America's Queen), as well as two previous accounts of the Borgia family. She lives in London.

GOR005336413
America's Queen: The Life of Jacqueline Kennedy Onassis by Sarah Bradford
Sarah Bradford
Used - Very Good
Paperback
Penguin Books Ltd
2013-10-31
736
0241967430
9780241967430
N/A
Book picture is for illustrative purposes only, actual binding, cover or edition may vary.
This is a used book - there is no escaping the fact it has been read by someone else and it will show signs of wear and previous use. Overall we expect it to be in very good condition, but if you are not entirely satisfied please get in touch with us.