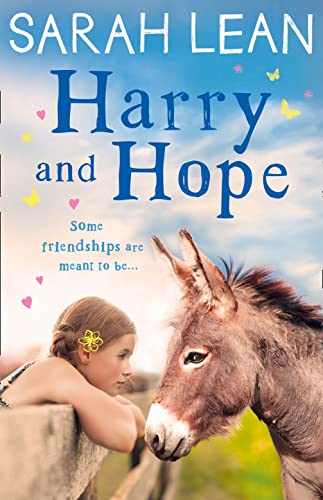 Harry and Hope
by Sarah Lean

Some friendships are meant to be... A story about family, friendship and belonging, from bestselling author, Sarah Lean.

Harry and Hope by Sarah Lean

Some friendships are meant to be... A story about family, friendship and belonging, from bestselling author, Sarah Lean.

Hope lives with her artist mum in the Pyrenees. It's always been just the two of them... until Frank - a free-spirited traveller - arrives with his donkey, Harry.

Hope and Frank form a close bond, so it's hard for both of them when Frank decides it's time to move on. Hope questions what she is to Frank. He's not her dad, but he was more than just her mum's boyfriend. Except, there's no name for that kind of pair...

Hope promises to look after Harry and, slowly, another special pair is made - one that makes Hope realise that some friendships become part of you and, even when someone is far away, they are always near to your heart.

"Beautifully written and moving without being mawkish. A talent to watch." - The Bookseller Buyers Guide

"Sarah Lean's graceful, miraculous writing will have you weeping one moment and rejoicing the next." - Katherine Applegate, author of The One and Only Ivan

Sarah Lean grew up in Wells, Somerset but now lives in Dorset with her husband, son and dog. She has worked as a page-planner for a newspaper, a stencil-maker and a gardener, amongst various other things. She gained a first class English degree and became a primary school teacher before returning to complete an MA in Creative and Critical Writing with University of Winchester. A Dog Called Homeless was her first novel.

GOR006744512
Harry and Hope by Sarah Lean
Sarah Lean
Used - Very Good
Paperback
HarperCollins Publishers
2015-03-12
288
0007512260
9780007512263
N/A
Book picture is for illustrative purposes only, actual binding, cover or edition may vary.
This is a used book - there is no escaping the fact it has been read by someone else and it will show signs of wear and previous use. Overall we expect it to be in very good condition, but if you are not entirely satisfied please get in touch with us.