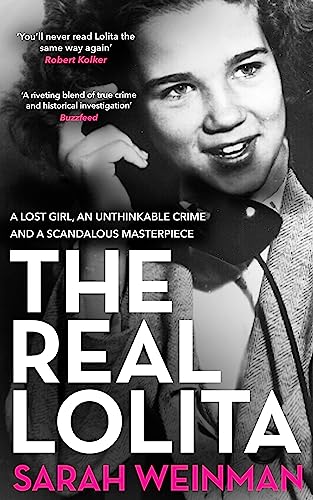 The Real Lolita by Sarah Weinman

The Real Lolita: A Lost Girl, An Unthinkable Crime and A Scandalous Masterpiece by Sarah Weinman

Vladimir Nabokov's Lolita is one of the most beloved and notorious novels of all time. And yet, very few of its readers know that the subject of the novel was inspired by a real-life case: the 1948 abduction of eleven-year-old Sally Horner.

Weaving together suspenseful crime narrative, cultural and social history, and literary investigation, The Real Lolita restores Sally Horner to her rightful place in the lore of the novel's creation. Drawing upon extensive investigations, legal documents, public records, and interviews with remaining relatives, Sarah Weinman casts a new light on the dark inspiration for a modern classic.

Sarah Weinman's captivating, heart-rending The Real Lolita offers both nuanced and compassionate true-crime reportage and revelatory cultural and literary history. It will, quite simply, change the way you think about Lolita and 'Lolitas' forever -- Megan Abbott
The Real Lolita is a tour de force of literary detective work. Not only does it shed new light on the terrifying true saga that influenced Nabokov's masterpiece, it restores the forgotten victim to our consciousness -- David Grann
Compassionate and necessary, Sarah Weinman's The Real Lolita is more than a true-crime achievement. It's a literary rescue mission, bringing to life the tragic real-life case that forms the dark heart of Nabokov's classic. You'll never read Lolita the same way again -- Robert Kolker
Sarah Weinman delivers a thoroughly riveting and heartbreaking narrative that weaves the very best of true crime writing with the darker elements of literary inspiration -- Gilbert King
The Real Lolita is the corrective we never knew we needed, a lively, engrossing work of scholarship that does not diminish Nabokov, but gently insists that we not indulge his trickster ways. Sally Horner matters and, thanks to Sarah Weinman, she and Dolores Haze will be forever linked. Groundbreaking work, a new genre unto itself -- Laura Lippman
A riveting blend of true crime, historical investigation, and literary analysis, Sarah Weinman adds another dimension to this already complicated context * Buzzfeed *
With The Real Lolita, Sarah Weinman might be said to have invented a completely new genre . . . Weinman is at her absolute best when playing detective and piecing together this tragic tale in all its sordid detail . . . the book contains twists and near misses and bit-part players, everything you might expect from a true-crime story, startlingly and simply told -- Ian Sansom * Literary Review *
Riveting . . . Scrupulously researched . . . Nearly 70 years after Sally Horner's death, Weinman's dark and compulsively readable book will make readers aware of the absence of a nearly forgotten girl's voice in discussions of one of the great works of American literature * Los Angeles Times *
Superb . . . By combing through court documents and newspaper accounts and interviewing surviving friends and family members, Weinman has evocatively reconstructed Sally [Horner]'s nightmare, as well as the sexual mores of mid-twentieth-century America * Irish Independent *
Utterly engrossing . . . Weinman dazzles the reader with the recreation of this time period . . . As we read through this mesmerizing book, Weinman's obsession becomes the reader's obsession. . . We develop boundless compassion for this once little girl, along with a deep empathy and sorrow for the story of her life * Los Angeles Review of Books *
Weinman's gripping work of true crime challenges a culture that privileges artistic genius over a child's life * Huffington Post *
A sensitive look at the troubling crime that influenced Vladimir Nabokov's most notorious book; Weinman writes with insight and empathy about both the famous author and the now-forgotten girl whose story intrigued him * Boston Globe *
In this stunning work of investigative journalism, Sarah Weinman resurrects the Horner case and uncovers its deep connection to Lolita * Refinery29 *
Superb . . . [Weinman] has now become something of a literary detective herself, conducting an investigation into the case she says inspired Lolita . . . Weinman assembles a substantial array of evidence . . . Weinman has compassionately given Sally Horner pride of place once more in her own life, a life that was first brutally warped by Frank La Salle, and then appropriated by one of the most brilliant writers of the 20th century * Washington Post *
Sarah Weinman is the editor of WOMEN CRIME WRITERS: EIGHT SUSPENSE NOVELS FROM THE 1940S AND 50S and TROUBLED DAUGHTERS, TWISTED WIVES: STORIES FROM THE TRAILBLAZERS OF DOMESTIC SUSPENSE. She is News Editor for PUBLISHERS MARKETPLACE, where she works on PUBLISHERS LUNCH. Her essays, features, and reviews have appeared in many print and online publications, including the GUARDIAN, NEW YORK TIMES, WALL STREET JOURNAL, NEW YORKER and WASHINGTON POST. Her features have twice been finalists for Canadian National Magazine Awards. www.sarahweinman.com | @sarahw
NGR9781474605618
9781474605618
1474605613
The Real Lolita: A Lost Girl, An Unthinkable Crime and A Scandalous Masterpiece by Sarah Weinman
Sarah Weinman
New
Paperback
Orion Publishing Co
2021-02-04
336
N/A
Book picture is for illustrative purposes only, actual binding, cover or edition may vary.
This is a new book - be the first to read this copy. With untouched pages and a perfect binding, your brand new copy is ready to be opened for the first time
Trustpilot