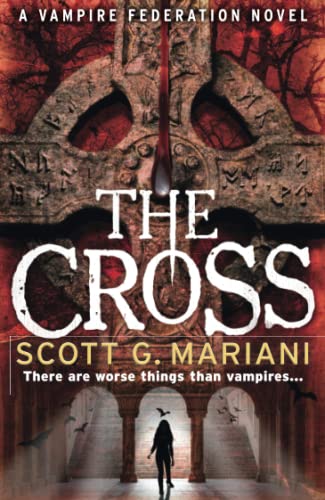 The Cross
by Scott G. Mariani

When an ancient cross is discovered in Eastern Europe it becomes a powerful weapon in the war between the trads and the Vampire Federation - but soon, the world is threatened by its discovery...

The Cross by Scott G. Mariani

When an ancient cross is discovered in Eastern Europe it becomes a powerful weapon in the war between the trads and the Vampire Federation - but soon, the world is threatened by its discovery...

The cross of Ardaich, feared by vampires, was believed to have been destroyed during the bloody war between the Vampire Federation and the Trads. But its accidental rediscovery could be catastrophic.

Detective Joel Solomon can't forgive VF agent Alex Bishop for making him a vampire. Yet when Federation arch-enemy Gabriel Stone enlists a vicious killer to retrieve the cross, the couple and their human allies become the only defence against pure evil.

If the cross is used to gain power by the UEbervampyr, the sadistic and primeval race of elite vampires, it isn't just ordinary vampires like Alex and Joel who will be in danger. Things could be about to turn very nasty for the human race...

A high-octane, action-packed adventure that will thrill fans of Charlaine Harris, Blade and The Passage.

Praise for THE CROSS:

"Essential reading for those bitten by the vampire craze.'
- Closer Book Club

"It's got action . . . it's a thriller . . . more hardcore Underworld action than Twilight angst. This could be the one for you."
- Falcata Times

"Dark and dirty . . . returns vampires to their rightful place as the creatures of nightmares."
- Monsters and Critics

'This fast-paced thriller leapt off the page!"
Closer Magazine

Scott Mariani is the author of the worldwide-acclaimed action-adventure thriller series featuring ex-SAS hero Ben Hope. Scott's novels have topped the bestseller charts in his native Britain and are translated into over twenty languages worldwide. The Cross is his second Vampire Federation novel, writing under the name Scott G. Mariani. He lives in rural West Wales.

GOR003206437
The Cross by Scott G. Mariani
Scott G. Mariani
Used - Very Good
Paperback
HarperCollins Publishers
2011-10-13
416
1847562132
9781847562135
N/A
Book picture is for illustrative purposes only, actual binding, cover or edition may vary.
This is a used book - there is no escaping the fact it has been read by someone else and it will show signs of wear and previous use. Overall we expect it to be in very good condition, but if you are not entirely satisfied please get in touch with us.