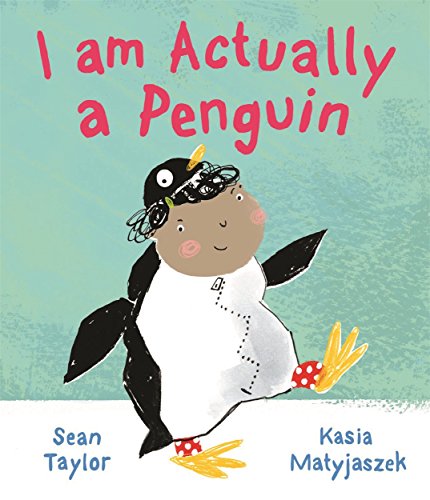 I am Actually a Penguin
by Sean Taylor

I am Actually a Penguin Summary

I am Actually a Penguin by Sean Taylor

When a little girl is given a penguin suit she decides that living as a penguin is much more fun than just dressing as one. But penguins don't exactly behave like people. They don't ride the bus like people, they don't talk like people and they certainly don't catch fish fingers like people. Her family tell her, "You're not actually a penguin," but she knows that she ACTUALLY is. A hilarious new picture book from Sean Taylor, the author of What a Naughty Bird and Kasia Matyjaszek, author/illustrator of I am a Very Clever Cat.

Customer Reviews - I am Actually a Penguin

I am Actually a Penguin Reviews

Another strong-willed girl features in Sean Taylor and Kasia Matyjaszek's I Am Actually a Penguin (Templar), in which the narrator dons a seabird persona along with her beloved new costume and refuses to behave in any way unbefitting a penguin. It's warm, hilarious, with acutely observed behaviour and a delightful twist. * The Guardian *
I AM ACTUALLY A PENGUIN BY SEAN TAYLORThe little girl loves dressing up, so when she is given a penguin suit she decides that living as a penguin is much more fun than just dressing as one. But the trouble is, penguins don't exactly behave like people. They come down stairs differently, they live on ice and their diet is quite different. But when her family tell her, "You're not actually a penguin," she knows that she ACTUALLY is. But all good things come to an end... Fun and unusual * Parents in Touch *
I once had a little girl in one of my reception classes who insisted for the first week that she was a dog, crawling around the place, drinking her milk on all fours, clutching the carton in her 'paws' and barking at her classmates. We all played along and soon the novelty wore off. The small girl narrator of this book is equally cute and equally determined; but having received a penguin suit from her Uncle Pat in Patagonia, she goes into full on, 'actually a penguin' mode right away. This involves all sorts of crazy activities such as festooning the living room with loo paper to create snow in which to keep cool. Such behaviour definitely doesn't go down well with a certain older brother although he does approve of the additional penguin at a family wedding ...and is willing to play along at meal times, especially when fish fingers are involved. All good things do have to come to an end however. Apart from anything else there's the question of school, not to mention as Dad rightly says, "Your penguin suit needs a wash." Time for a change perhaps ... Sean Taylor's zany sense of humour shines through in this narrative providing Kasia Matyjaszek with a hilarious sequence of events to wield her illustrative magic on and she does it brilliantly making every spread a small piece of theatre. * Red Reading Hub *
Not all penguins live amongst the ice and snow... Author Sean Taylor and illustrator Kasia Matyjaszek are on top form in a joyously comical picture book that celebrates the power of a child's imagination. Every parent knows their child loves dressing up but one little girl is convinced that she has actually turned into a penguin... The little girl loves putting on her dressing-up clothes because that way, she doesn't have to be 'me' any more. But when she is given her favourite outfit, a penguin suit, she decides that living as a penguin is much more fun than just dressing as one. The problem is that penguins don't exactly behave like people... they don't ride on the bus like people, they don't talk like people and they certainly don't catch fish fingers like people. Her mum worries she might break something when she comes down the stairs like a penguin and her dad is trying to get used to giving a goodnight kiss to a penguin. In fact, all her family tell her, 'You're not actually a penguin' but she knows that she actually is! Taylor, author of Hoot Owl, captures the wonderful spirit of youthful imagination and enterprise in this funny, charming story packed with Matyjaszek's warm, whimsical and vibrant illustrations. Everyone will be flapping their wings with joy when they p-p-p-pick up this penguin adventure! * Lancashire Evening Post *
For a human who wants to be an animal, you can't better I am Actually a Penguin by Sean Taylor, illustrated by Kasia Matyjaszek. Although the title sounds as if it's Lola speaking from Charlie and Lola, and replicates the more restrictive older brother, this little girl is even more stubborn than Lola. Her family try to implore her to remove her costume, to not unroll toilet paper across the sofa as snow, to not come down the stairs head first in penguin slide mode, but all to no avail. Then finally, she realises she cannot go to school dressed as a penguin - the twist in the ending is equally endearing. A great book for anyone who's ever schlepped around a stubborn fancy-dress clad toddler, or anyone with a warm sense of humour. * Minerva Reads *

Sean Taylor (Author) Sean Taylor is an award-winning author of books for young readers of many different ages. His picture books include Hoot Owl Master of Disguise, It's A Groovy World, Alfredo!, Robot Rumpus, BOING!, When a Monster is Born and Crocodiles are the Best Animals of All! He has also written the Purple Class series of comic adventures set in an urban primary school, a collection of folktales from the Amazon called The Great Snake, and the novel for teenagers A Waste of Good Paper. Over the years he and his family have spent spells living in England (where he was born) and Brazil (where his wife is from). Kasia Matyjaszek (Illustrator) Kasia is an Edinburgh-based illustrator. She graduated with a Masters in Illustration from The Edinburgh College of Art in 2010. Her artwork has been highly commended in the Macmillan Book Prize and she was a finalist the Picture Hooks mentoring scheme . I am a Very Clever Cat is the first book she has both written and illustrated.

GOR008703478
I am Actually a Penguin by Sean Taylor
Sean Taylor
Used - Very Good
Paperback
Templar Publishing
2017-07-13
32
1783704519
9781783704514
N/A
Book picture is for illustrative purposes only, actual binding, cover or edition may vary.
This is a used book - there is no escaping the fact it has been read by someone else and it will show signs of wear and previous use. Overall we expect it to be in very good condition, but if you are not entirely satisfied please get in touch with us.