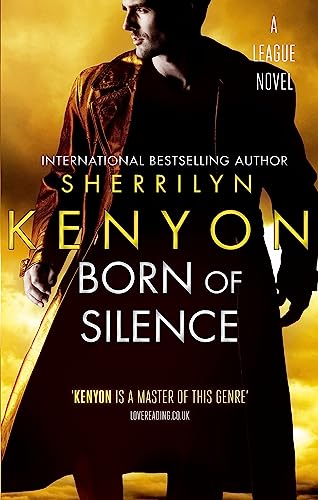 Born Of Silence
by Sherrilyn Kenyon

Used Price
$25.49
inc. GST
Free Shipping in Australia
In the Ichidian Universe, the League and its ruthless assassins continue to keep rule. But at what cost? Welcome back to the future. . .and a whole new world.
Reviews:
Trustpilot
Very Good

Born Of Silence: Number 5 in series by Sherrilyn Kenyon

The second most infamous member of the shadow organisation called Sentella, Kere, an explosives engineer, is known for striking terror in the hearts of all enemies. The bounty on his head is truly staggering, and no one outside the Sentella knows his real identity.

Zarya Starska grew up hard on the back streets of hell. Labeled a traitor because of her father's political beliefs, she dreams of a different life and a different world. A world where the harsh hand of the Caronese government doesn't destroy the lives of its citizens. As a resistance leader, her goal is to topple to government that took her father's life, along with her mysterious right-hand man, known only as Kere.

But Kere has a dark secret. He's out for revenge for past crimes against his family, and plans to annihilate all those he feels guilty, along with every resistance member he can find . . . including Zarya.

Writing as Sherrilyn Kenyon and Kinley MacGregor, she is the No. 1 New York TImes bestselling and award-winning author of several series: the Dark-Hunters; the Lords of Avalon; The Chronicles of Nick, the League and the Belador. She lives with her husband and three sons in Nashville, Tennessee.

GOR005361490
Born Of Silence: Number 5 in series by Sherrilyn Kenyon
Sherrilyn Kenyon
League
Used - Very Good
Paperback
Little, Brown Book Group
2012-10-04
624
0749954981
9780749954987
N/A
Book picture is for illustrative purposes only, actual binding, cover or edition may vary.
This is a used book - there is no escaping the fact it has been read by someone else and it will show signs of wear and previous use. Overall we expect it to be in very good condition, but if you are not entirely satisfied please get in touch with us.