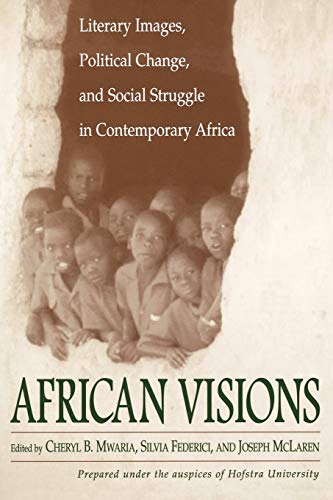 The complexity of African society entering the 21st century necessitates an interdisciplinary examination of Africa's political, social, and cultural developments and challenges.

The complexity of African society entering the 21st century necessitates an interdisciplinary examination of Africa's political, social, and cultural developments and challenges. Focusing on Social Movements and Literature, Social Change and Culture, the book brings together a wide range of essays by committed scholars, writers, and activists concerned with progressive approaches to Africa's dilemmas.

CHERYL B. MWARIA is a medical anthropologist who is Associate Professor of Anthropology and Director of African Studies at Hofstra University. She has served on the Board of the American Ethnological Society and is a member of the Committee for Academic Freedom in Africa. She has written on childbirth and child rearing in Kenya, biomedical ethics, women's health, and race relations.

SILVIA FEDERICI is Associate Professor of International Studies and Political Philosophy at New College, Hofstra University. She is a founding member and coordinator of the Committee for Academic Freedom in Africa. Among her earlier publications is Enduring Western Civilization: The Construction of the Concept of Western Civilization (Praeger, 1995).

JOSEPH McLAREN is an Associate Professor of English at Hofstra University. He has written extensively on black literature and culture. His works include Langston Hughes: Folk Dramatist in the Protest Tradition, 1921-1943 (Greenwood Press, 1997).

Introduction Social Movements Poem: What Is the Soul of Africa by Dennis Brutus Africa 2000: In the New Global Context by Dennis Brutus The International Intellectual Property Regime and the Enclosure of African Knowledge by C. George Caffentzis Mijikenda Perspectives on Religious Freedom and Cultural "Rights" by Diane Ciekawy Structural Adjustment and the African Diaspora in Italy, by Steven Colatrella The New African Student Movement by Silvia Federici Academic Pursuits under the Link, by Karim F. Hirji Democratization and Interventionism in Francaphone Sub-Saharan Africa by Francois Ngolet A Vision of the Past as a Beacon for the Future: The Application of Fatimid Ideals in the City of Cairo by Habibeh Rahim Women, AIDS and the Female Condom: Preventing HIV in Southern Africa by Ida Susser Literature, Social Change, and Culture Poem: The Monstrous Instrument by Maina Kinyatti African Languages and Global Culture in the 21st Century by Ngugi wa Thiong'o Hybridity, Neouniversalist Cultural Theory, and the Comparative Study of Black Literatures by F. Odun Balogun White Women, Black Revolutionaries: Sex and Politics in Four Novels by Nancy Topping Bazin Popular Hausa Drama in Niger and the Politics of Its Appropriation by Ousseina Alidou Doula Developmental Pleasures, Education, Entertainment, and Popular Literacy in South Africa by Loren Kruger Socialist Oriented Literature in Post-Colonial Africa: Retrospective and Prospective by Alamin M. Mazrui The Nigerian Novel in English: Trends and Prospects by Joseph McLaren Writing In and Out of Algeria, Writing Algeria, Today by Soraya Mekerta Post-Apartheid Drama by Donald Morales Index
NLS9780275971021
9780275971021
0275971023
African Visions: Literary Images, Political Change, and Social Struggle in Contemporary Africa by Silvia Federici
Silvia Federici
New
Paperback
ABC-CLIO
2000-08-30
304
N/A
Book picture is for illustrative purposes only, actual binding, cover or edition may vary.
This is a new book - be the first to read this copy. With untouched pages and a perfect binding, your brand new copy is ready to be opened for the first time
Trustpilot