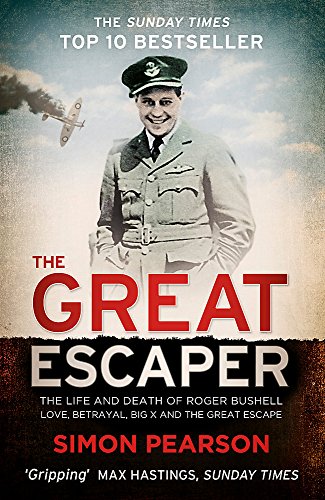 The Great Escaper
by Simon Pearson

The Great Escaper: The Life and Death of Roger Bushell by Simon Pearson

Roger Bushell was 'Big X', mastermind of the mass breakout from Stalag Luft III in March 1944, immortalised in the Hollywood film The Great Escape.Very little was known about Bushell until 2011, when his family donated his private papers - a treasure trove of letters, photographs and diaries - to the Imperial War Museum. Through exclusive access to this material - as well as fascinating new research from other sources - Simon Pearson, Chief Night Editor of The Times, has now written the first biography of this iconic figure. Born in South Africa in 1910, Roger Bushell was the son of a British mining engineer. By the age of 29, this charismatic character who spoke nine languages had become a London barrister with a reputation for successfully defending those much less fortunate than him. He was also renowned as an international ski champion and fighter pilot with a string of glamorous girlfriends. On 23 May, 1940, his Spitfire was shot down during a dogfight over Boulogne after destroying two German fighters. From then on his life was governed by an unquenchable desire to escape from Occupied Europe.Over the next four years he made three escapes, coming within 100 yards of the Swiss border during his first attempt. His second escape took him to Prague where he was sheltered by the Czech resistance for eight months before he was captured. The three months of savage interrogation in Berlin by the Gestapo that followed made him even more determined. Prisoner or not, he would do his utmost to fight the Nazis. His third (and last escape) destabilised the Nazi leadership and captured the imagination of the world.He died on 29 March 1944, murdered on the explicit instructions of Adolf Hitler.Simon Pearson's revealing biography is a vivid account of war and love, triumph and tragedy - one man's attempt to challenge remorseless tyranny in the face of impossible odds.

'This gripping biography... Pearson has done uncommonly well in this, his first book, to unearth so much.' -- Max Hastings * Sunday Times *
'Told with wonderful relish by Simon Pearson, who has undoubtedly produced the definitive biography of Bushell.' * Daily Express *
'The Great Escaper is a compelling narrative, one which paints a convincing picture of a true war hero.' -- Allan Mallinson * The Times *
'Pearson's biography of Roger Bushell is as gripping as it is informative and wonderful.' * Huffington Post *
This is a most readable and carefully researched book about a truly remarkable man and is a must for all readers of history of the Second World War. * Geoffrey Wellum, author of First Light *
Simon Pearson has at last done justice to [Roger Bushell's] memory in this enthralling book, an astounding story of honour and resilience. * Sunday Times *
What a read. Pearson's research is absolutely on the ball and the book is so descriptive I felt as if I were actually flying a Spitfire in 1940...The whole book was fascinating, I could not put it down. Rare you to read it - you will not fail to be moved. * Scotland on Sunday *

Simon Pearson has worked on The Times since 1986. His interest in military history was stimulated by his father who served with the RAF in World War Two. He is the author of the bestselling The Great Escaper, published in 2013 and described by the Sunday Times as 'enthralling, an astounding story of honour and resilience'.

GOR005637616
The Great Escaper: The Life and Death of Roger Bushell by Simon Pearson
Simon Pearson
Extraordinary Lives, Extraordinary Stories of World War Two
Used - Very Good
Paperback
Hodder & Stoughton General Division
2014-03-27
448
1444760661
9781444760668
N/A
Book picture is for illustrative purposes only, actual binding, cover or edition may vary.
This is a used book - there is no escaping the fact it has been read by someone else and it will show signs of wear and previous use. Overall we expect it to be in very good condition, but if you are not entirely satisfied please get in touch with us.