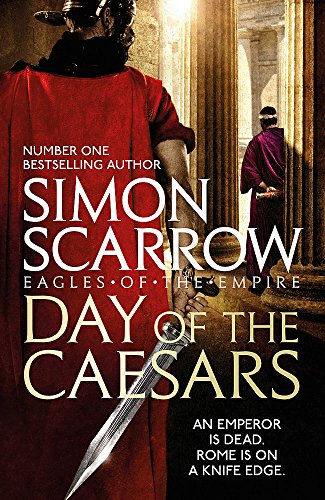 AD 54. The Emperor Claudius is dead. The threat of civil war hangs over the Empire. Roman army Prefect Cato and Centurion Macro could save the day - or lose their lives in the fighting. The brilliant new adventure in the Eagles of the Empire series. From the Sunday Times-bestselling author of INVICTUS and CENTURION.

Day of the Caesars (Eagles of the Empire 16) Summary

AD 54. Claudius is dead. Rome is in turmoil. And two brave heroes of the Roman army face the challenge of their lives.

Simon Scarrow's DAY OF THE CAESARS is not to be missed by readers of Conn Iggulden and Bernard Cornwell. 'A new book in Simon Scarrow's series about the Roman army is always a joy' The Times

The Emperor Claudius is dead. Nero rules. His half-brother Britannicus has also laid claim to the throne. A bloody power struggle is underway.

All Prefect Cato and Centurion Macro want is a simple army life, fighting with their brave and loyal men. But Cato has caught the eye of rival factions determined to get him on their side. To survive, Cato must play a cunning game, and enlist the help of the one man in the Empire he can trust: Macro.

As the rebel force grows, legionaries and Praetorian Guards are moved like chess pieces by powerful and shadowy figures. A political game has created the ultimate military challenge. Can civil war be averted? The future of the Empire is in Cato's hands...

Customer Reviews - Day of the Caesars (Eagles of the Empire 16)

Day of the Caesars (Eagles of the Empire 16) Reviews

Praise for Simon Scarrow's novels: 'I really don't need this kind of competition... It's a great read' -- Bernard Cornwell
Scarrow's [novels] rank with the best * Independent *
Gripping and moving * The Times *
[Simon Scarrow] blends together historical facts and characters to create a book that simply cannot be put down... Highly recommended * Historical Novels Review *
A satisfyingly bloodthirsty, bawdy romp...perfect for Bernard Cornwell addicts who will relish its historical detail and fast-paced action. Storming stuff * Good Book Guide *
Rollicking good fun * Mail on Sunday *
A new book in Simon Scarrow's long-running series about the Roman army is always a joy * The Times *

GOR008790281
Day of the Caesars (Eagles of the Empire 16) by Simon Scarrow
Simon Scarrow
Used - Like New
Hardback
Headline Publishing Group
2017-11-14
384
1472213408
9781472213402
N/A
Book picture is for illustrative purposes only, actual binding, cover or edition may vary.
The book has been read, but looks new. The book cover has no visible wear, and the dust jacket is included if applicable. No missing or damaged pages, no tears, possible very minimal creasing, no underlining or highlighting of text, and no writing in the margins.