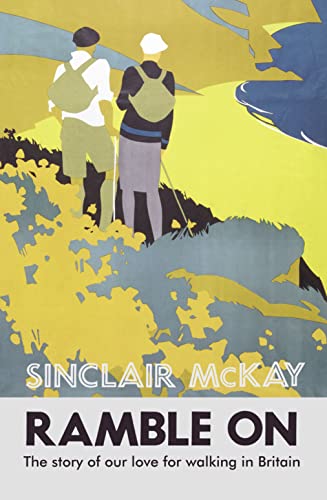 Ramble On
by Sinclair McKay

This fascinating ramble through the history of walking delves into our relationship with the British countryside.

Ramble On: The story of our love for walking Britain by Sinclair McKay

This fascinating ramble through the history of walking delves into our relationship with the British countryside.

`Ramble On' tells the story of how country walks were transformed from a small and often illegal pastime to the most popular recreational activity in the country.

From the brave band of hikers who scaled the off-limits peak Kinder Scout in 1932, via the intricate Lake District guides of Alfred Wainwright, to the resistant landowners (including the notorious Nicholas Van Hoogstraten, Madonna and Jeremy Clarkson) who have done their level best (and worst) to keep walkers off their land - this is the definitive history of rambling.

Perfectly capturing the sense of exhilaration on reaching the summit of a blustery hill-top path, `Ramble On' is for anyone who has ever pulled on a pair of walking boots or is partial to the taste of Kendal mintcake.

Praise for `Ramble On':

`McKay makes an agreeable tramping companion. For McKay walking is a serious pleasure, which is as it should be' Tom Fort, Sunday Telegraph

`Ramble On is a fascinating and lovingly written book that gets to the heart of a pursuit enjoyed by thousands throughout the British Isles every weekend' Carl Wilkinson, Financial Times

`Excellent history of the pastime ... McKay's gripping story of the struggle is enlivened by atmospheric descriptions of his own rambles and is rich in anecdote' John Harding, Daily Mail

`Sinclair McKay aims to convey the essence of this story through visits to some of the often inspiring places in which it has been acted out.' Guardian

Chronicles the changing relationship between landowners and roamers, and branches out into B&B, Wordsworth, Wainright, shifting patterns of class and the history of walking togs' Country Life

`Charming book - part of a history of British walking, part of a memoir of McKay's wanderings.' Daily Telegraph

`Highly companionable ... McKay gives a fascinating account of how walkers have since the Thirties battled landowners for the right to roam across Britain. In McKay's version, walking is a political act and the Rambler's Association is an advanced guard of egalitarians.' Sunday Telegraph Books of the Year

`This book should inspire you to don your walking boots and head for the hills' Choice Magazine, Paperback Book of the Month

Sinclair McKay is a features writer for The Telegraph and The Mail on Sunday. He is also the acclaimed author of the bestselling `The Secret Life of Bletchley Park'.

GOR004858227
Ramble On: The story of our love for walking Britain by Sinclair McKay
Sinclair McKay
Used - Very Good
Paperback
HarperCollins Publishers
2013-03-28
352
0007428669
9780007428663
N/A
Book picture is for illustrative purposes only, actual binding, cover or edition may vary.
This is a used book - there is no escaping the fact it has been read by someone else and it will show signs of wear and previous use. Overall we expect it to be in very good condition, but if you are not entirely satisfied please get in touch with us.