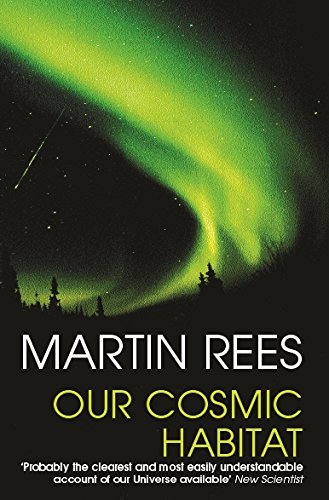 In Stock
$13.99
inc. GST
The Astronomer Royal takes the lay reader on a lucid and awe-inspiring guided tour of the universe in time and space - a landmark in popular science writing.
Very Good
Only 2 left

The Astronomer Royal takes the lay reader on a lucid and awe-inspiring guided tour of the universe in time and space - a landmark in popular science writing.

Our universe seems strangely 'biophilic,' or hospitable to life. Is this providence or coincidence? According to Martin Rees, the answer depends on the answer to another question, the one posed by Einstein's famous remark: 'What interests me most is whether God could have made the world differently.' This highly engaging book centres on the fascinating consequences of the answer being 'yes'.

Rees explores the notion that our universe is just part of a vast 'multiverse,' or ensemble of universes, in which most of the other universes are lifeless. What we call the laws of nature would then be local bylaws, imposed in the aftermath of our own Big Bang. In this scenario, our cosmic habitat would be a special, possibly unique universe where the prevailing laws of physics allowed life to emerge.

Martin appeared in the Sunday Times 16th February as author of the A Little Night Reading column his paperback writers column for The Guardian Saturday Review, was published on March 29th. An article by Martin was article of the week on www.firstscience.com. The book is mentioned as further reading in a number of articles/reviews of his new book published with Heinemann. Martin appeared on the Fi Glover Program, BBC Radio 5 on Thursday 27th February and a special National Science Week program for BBC Radio Cambridge on March 19th hewas interviewed in more depth by BBC Radio Cambridge on Sunday 6th April. Review have appeared in The Sunday Times and Focus with a notice in Nature re the publication of the paperback. He provides an excellent introduction to thesubject, moving deftly from the extremely large to the very small...SUNDAY TI

Sir Martin Rees is an international leader in cosmology. He is Royal Society Research Professor at Cambridge University, and holds the title of Astronomer Royal. Together with his numerous collaborators he has contributed many key ideas on black holes, galaxy formation and high energy astrophysics.

His most recent books are GRAVITY'S FATAL ATTRACTION: BLACK HOLES IN THE UNIVERSE (with Mitchell Begelman), BEFORE THE BEGINNING: OUR UNIVERSE AND OTHERS and JUST SIX NUMBERS: THE DEEP FORCES THAT SHAPE THE UNIVERSE.

GOR001723081
Our Cosmic Habitat by Sir Martin Rees
Sir Martin Rees
Used - Very Good
Paperback
Orion Publishing Co
2003-02-06
224
0753814048
9780753814048
N/A
Book picture is for illustrative purposes only, actual binding, cover or edition may vary.
This is a used book - there is no escaping the fact it has been read by someone else and it will show signs of wear and previous use. Overall we expect it to be in very good condition, but if you are not entirely satisfied please get in touch with us.