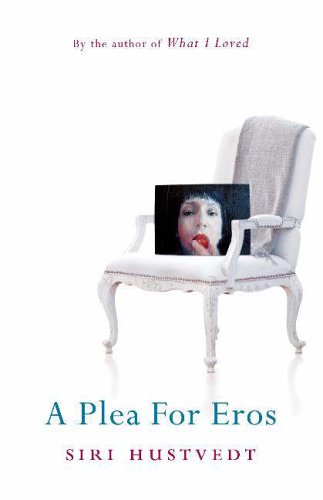 A Plea For Eros
by Siri Hustvedt

Used Price
$15.99
inc. GST
Free Shipping in Australia
The critically acclaimed author of the bestselling WHAT I LOVED reflects on life, love and literature
Very Good

A Plea For Eros Summary

A Plea For Eros by Siri Hustvedt

A stunning collection of essays by the author of WHAT I LOVED, in which she addresses many of the themes explored in her novels - identity, sexual attraction, relationships, family, mental illness, the power of the imagination, a sense of belonging and mortality. In three cases, she focuses on the novels of other writers - Dickens, James and Fitzgerald. She also refers to her own novels, affording an unusual insight into their creation. Whatever her topic, her approach is unaffected, intimate and conversational, inviting us both to share her thoughts and reflect on our own views and ideas.

A Plea For Eros Reviews

'She strides across these pages: a 6ft tall Amazonian New Yorker...by whom we are at once riveted and faintly disconcerted...Hustvedt is a lucid writer, whose spare, elegant prose wears lightly its eclectic reference points.' * Observer *
'Thoughtful, sensuous essays...her enthusiasms are oddly infectious' * Daily Telegraph *
'A luminous collection of mind-expanding pieces on literary and philosophical themes...A book to renew one's faith in the literary essay' * Robert McCrum, Observer *
'An intellectual, emotional and elegantly written collection that leaves the reader with plenty to ponder...Her passion for language and literature makes the prose leap from the page...Hustvedt is, quite simply, an extraordinary literary talent. Read it, ponder it, then go read it again.' * Image *

Siri Hustvedt's first novel, The Blindfold, was published by Sceptre in 1993. Since then she has published The Enchantment of Lily Dahl, What I Loved, The Sorrows of an American, The Summer Without Men and The Blazing World, which was longlisted for the Man Booker Prize in 2014 and won the Los Angeles Times Book Prize for Fiction. She is also the author of the poetry collection Reading To You, and four collections of essays -Yonder, Mysteries of the Rectangle: Essays on Painting, A Plea for Eros and Living, Thinking, Looking, as well as the memoir The Shaking Woman or A History of My Nerves. Born in Minnesota, Siri Hustvedt now lives in Brooklyn, New York. She has a PhD in English from Columbia University and in 2012 was awarded the International Gabarron Prize for Thought and Humanities. She delivered the Schelling Lecture in Aesthetics in Munich in 2010, the Freud Lecture in Vienna in 2011 and the opening keynote at the conference to mark Kierkegaard's 200th anniversary in Copenhagen in 2013, while her latest honorary doctorate is from the University of Gutenburg in Germany. She is also Lecturer in Psychiatry at Weill Cornell Medical College and has written on art for the New York Times, the Daily Telegraph and several exhibition catalogues.

GOR001709237
A Plea For Eros by Siri Hustvedt
Siri Hustvedt
Used - Very Good
Paperback
Hodder & Stoughton General Division
2006-02-13
240
0340839783
9780340839782
N/A
Book picture is for illustrative purposes only, actual binding, cover or edition may vary.
This is a used book - there is no escaping the fact it has been read by someone else and it will show signs of wear and previous use. Overall we expect it to be in very good condition, but if you are not entirely satisfied please get in touch with us.